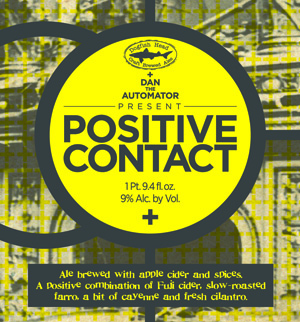 9% | Strong Ale with Cider and Spices

This release from Dogfish is a collaboration with producer Dan the Automator from, among other hip-hop projects, Deltron 3030. The beer name is also a track on Deltron’s first album.

This beer feels as futuristic and out-there as a lot of the early Deltron tracks, made with Fuji cider, roasted faro, cayenne, and fresh cilantro. (The Beer Judge Certification Program guidelines just kind of shrug their shoulders on this one.) I’ve had some iffy limited releases from Dogfish Head over the years, but this one’s drinking nicely right now. Aromatics show fresh cider, a sourdough twang, and just a hint of that underlying spice. And the mouthfeel’s on point: nice effervescence with an appealing bitter edge of white pepper and integrated spice. The cayenne and cilantro tend to keep their heads ducked, and the result is a vibrant, bready apple ale with well-done spicing.