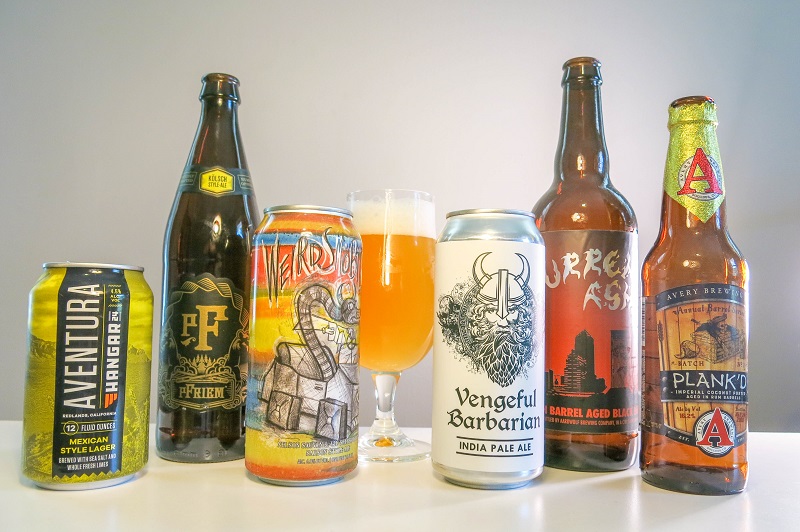 Used to be when you saw “Mexican lager” on a label, that meant the beer inside was likely fashioned after a Vienna lager, or a light lager brewed with corn. These days Mexican-style lagers are more popular than ever, though many brewers take liberty to include ingredients that also call to mind the culture or cuisine of Mexico. In the case of Hangar 24 Craft Brewing, that means salt from the Sea of Cortez and limes from San Diego. We’ve seen both salt and lime used in other examples of the style, and though they aren’t traditional (save for adding a lime to a bottle of Corona) they do seem to fit in with the feel of this admittedly broad and growing category of beers. Aventura is more in the pilsner vein, with a slightly sweet, biscuity malt character–no corn here. There is a light tartness on the palate from the limes and the salt comes through on the finish, but neither is so prominent that they take away from a very well-executed lager base.

pFriem goes out of its way to let you know this is not a Kölsch, but rather a Kölsch-style ale. Some may dismiss this as merely semantics, but it’s a sign of respect for the style and its birthplace of Cologne, Germany (many brewers are currently trying to find the appropriate words for their Lambic-like beers, too). While the brewery notes that it was not brewed in Cologne, you might think otherwise were you to sample this blind from a thin-walled stange. On the surface, it seems such a simplistic beer: sweet pilsner malt and noble hops that contribute notes of white grape, lemon and green apple peel, with an effervescent, light body. But this is one of those beers for which words fail. The beer has a fresh, balanced quality that few American attempts can match. If you have access to pFriem’s beers, you owe it to yourself to try it.

This is a hazy saison dry-hopped with Nelson Sauvin and Vic Secret hops, and yet it’s not as strange as that description or the name itself might suggest. The yeast-driven notes you’d expect in a saison are masked by the hops, which contribute juicy lemon, lime and white wine notes. With the beer’s hazy appearance and minimal farmhouse flavors, this puts us more in the mind of a Southern Hemisphere approach to a New England IPA. While Citra, Mosaic, Amarillo and other hops are popular for good reason, this was a really interesting collaboration that has us hoping for more such beers, no matter how “weird.”

We sampled several hazy IPAs from Alvarado Street Brewery this week, and Vengeful Barbarian came out on top. There are the fruity notes you expect of the style, namely grapefruit and tangerines, but where some New England-style IPAs veer too heavily into sweet and juicy, this one maintains a firm bitterness to keep things in balance. Subtle notes of melon rind and mint, along with an exceptionally refreshing finish, distinguish this one.

First, a disclaimer. If you don’t enjoy Scotch–and in particular the peated varieties of Islay–then turn around right now. But if the mention of Band-Aids and ash and smoke don’t deter you, then you’re in for a treat. The beer offers up the unmistakable sweet and earthy scent of peat-smoked malt. Upon taking the first sip, you’d be inclined to think the whisky has overwhelmed the black barleywine. But let it warm and linger in your mouth a bit, and you’ll find piney hops and a nuttiness from the malt. Peated Scotch isn’t for everyone–but if it’s for you, then this beer is, too.

Forgive the pun, but it would have been easy for the brewery to go overboard here with the coconut and rum. But Avery, no stranger to big, barrel-aged beers, often finds its balance with ingredients like these simply by brewing an insurmountable monster of a beer. You get coconut on the aroma, but it’s behind a huge serving of rich fudge and pumpernickel. Coconut is on the palate as well, but not so much that it detracts from delectable notes of brownies, Tootsie Roll and, yes, rum. The barrel and the beer’s 16.2% ABV lend a touch of heat, as you’d expect, and Plank’d finishes creamy and viscous. Like other Avery beers, it’s remarkable how simultaneously bold and nuanced this beer is.