Six to Seek: The Best IPAs of the Week 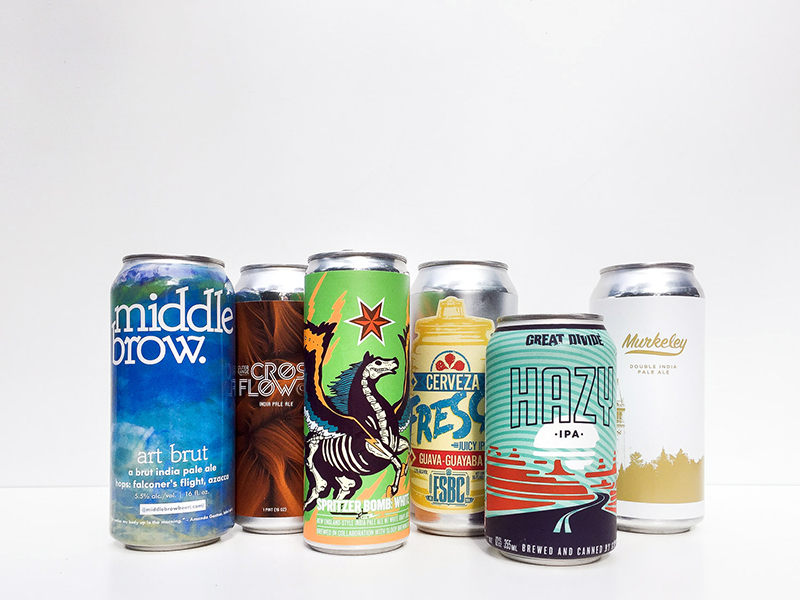 Since today is IPA Day, we’re showcasing not just the best beers we’ve had this week, but the best IPAs.

And truth be told, it wasn’t hard to find six really impressive examples of a single (though admittedly broad) style. Of the many beers sent to us on a weekly basis, probably 80 percent are some style of IPA. And of those, the overwhelming majority fall under the hazy/juicy/milkshake/New-England-style umbrella.

This week’s Six to Seek, then, reads like the state of IPA today, dominated by hazy beers with one example of the emerging Brut IPA style.

But know this: we still love West Coast IPAs. Remember those? Those clear, piney, unapologetically bitter beers we once cherished? The kind of beer that was en vogue at the time of the inaugural IPA Day in 2011?

Next week, we’ll get back to our regularly scheduled programming, with a more diverse selection of styles. But for now, read on for the six best IPAs we tasted this week.

Middle Brow’s Art Brut almost looks like champagne, pouring a light, glimmering gold. The blended yeast brings pear, green apple and even, surprisingly, a little caraway spice, with that dry quality that champagne has. It’s at first an odd sensation to be drinking an IPA with as many flavors coming from the yeast as from the hops, but it’s a fun experience. The hops used (Falconer’s Flight and Azacca) do impart some notes of pine and papaya, and the high carbonation and dry finish makes this one a refreshing and fun choice.

Great Divide’s Hazy IPA was recently released in limited quantities throughout Denver. Hopped with what seem to have become the holy trinity these days–Citra, Mosaic and El Dorado–the beer offers up not just the requisite fruity notes you’d expect of the style, but has a distinct herbal quality to the nose. There is a slight mintiness on the palate, followed by grapefruit and fresh-squeezed orange juice. Given the style’s short shelf life Great Divide hasn’t rolled this one out to larger distribution, but if you can find it fresh don’t pass it up.

A mashup of Sixpoint’s Spritzer series with Sloop’s Juice Bomb IPA, Spritzer Bomb: White is hopped with Citra, Enigma and Vic Secret. Those juicy hopes are complemented also by grape juice, specifically a blend of muscat, sauvignon blanc and gewürztraminer. The hops and grape juice combine to provide notes of lemon, lime and tart apples, with grapefruit and pineapple reminding you that this is still undeniably an IPA. The citric finish and white wine notes, however, might also put you in the mind of a mimosa.

This collaboration between two of Colorado’s most popular breweries is double dry-hopped with Citra, Galaxy and Nelson Sauvin hops. It pours a flat, pale yellow–not unlike the inside of a banana. What it lacks in looks, though, it makes up for in hop flavor and aroma. The nose is pungent, with grapefruit, pineapple and nectarines wafting from the glass. The palate’s more of the same, with a huge, citrusy punch. Though it’s perhaps a little one-note, it strikes that one note exceptionally well.

This was a very different sort of “juicy IPA” from El Segundo. Instead of a heavy emphasis on bold citrus flavors, it has more of a gentle and round quality to it. That’s not to say that it lacks juiciness or that the fruit notes aren’t there; there’s peach, pineapple and of course guava, but also a floral quality and very little bitterness, with a bit of hop spice on the finish that almost comes through like a noble hop. It’s a very refreshing beer, with the hops and guava working together in perfect harmony.

Pure Project and Fieldwork collaborated on Murkeley, a nod to Fieldwork’s home in Berkeley and to both breweries’ affection for hazy, murky IPAs. The nose has a sweetness to it reminiscent of peach cobbler, while the palate offers up more peach, grapefruit, melon and a dankness–and welcome bitterness–on the finish.

Six to Seek celebrates the best beers we’ve tasted this week. Check out our best beers of weeks past here.