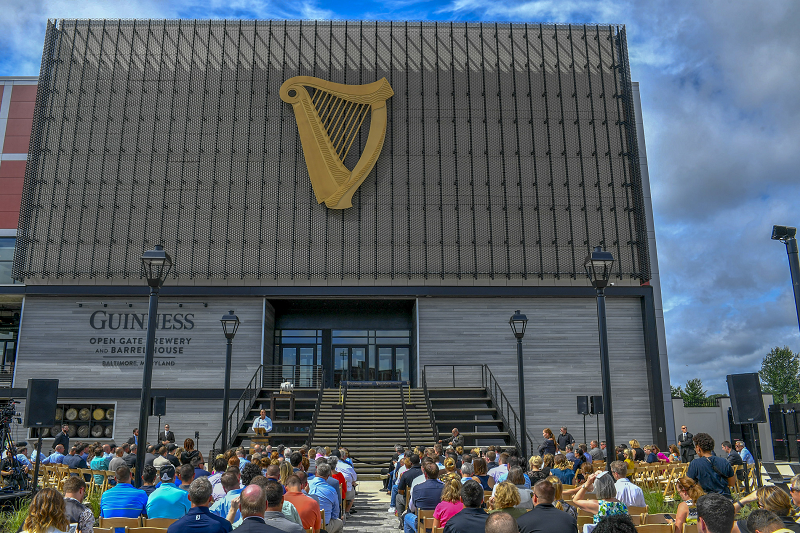 BALTIMORE, Md.—This afternoon Guinness brewers, executives and guests from the local community gathered for a ceremonial ribbon-cutting at the new home of Guinness in America – the Open Gate Brewery & Barrel House in Maryland. Doors will officially open to the public tomorrow at 3 p.m. ET.

“This brewery has long been a dream for Guinness, and an incredible amount of hard work has gone into getting these doors open,” said Diageo Beer Company USA Chairman and Diageo Global Chief Sales Officer Tom Day. “I can’t wait to see people enjoying the fantastic beer our brewers have made in this historic and beautiful building. I’m proud that we have created something special and quintessentially Guinness here in Maryland.”

Located just 10 miles from downtown Baltimore and 30 miles northeast of Washington, D.C., the Open Gate Brewery & Barrel House is conveniently located and part of an exciting and growing brewing scene in Maryland. It will be the home of Guinness Blonde, along with new Guinness beers created for the U.S. market. The creation of a world-class brewery, barrel house and visitor center, and development of packaging and warehousing operations has generated more than 200 jobs and represents an investment by Diageo of approximately $90 million in the Maryland project.

The first part of the brewery’s name takes inspiration from the Guinness Open Gate Brewery in Dublin – where the company has experimented in beer for more than a century. The second part of the name, “Barrel House,” is a nod to the long history of Guinness brewers maturing beer in wood barrels, a tradition this new brewery intends to continue. In addition, the space was once home to a historic whiskey distillery, so the site already boasts a venerable heritage of barrel-aging.

“Our administration is proud of Maryland’s robust and growing brewing industry and we are excited to welcome a legendary brewer like Guinness to our great state,” said Maryland Governor Larry Hogan. “In addition to more than 200 new jobs, this new facility’s full-time brewing and hospitality operations will bring a new source of tourism to Baltimore County and to Maryland. We remain committed to supporting companies that invest in our communities and our citizens, and Guinness opening its doors today is yet another example that Maryland is open for business.”

Leveraging a pre-existing structure for the project, as opposed to starting from scratch with a green field development, was a priority for Guinness to maintain parent company Diageo’s commitment to environmental sustainability. Guinness has also implemented measures to reduce the overall electric consumption and water usage at the site, while utilizing recycled elements for the build, along with low volatile organic compound (VOC) materials and paints, to accent the building.

“A lot more than hops goes into building a brewery,” said Baltimore County Executive, Don Mohler. “We partnered with Diageo from permits to passing legislation, all to be sure these historic buildings would become a world class destination for Baltimore County and the region.”

The Open Gate Brewery & Barrel House is the first Guinness brewing operation on U.S. soil in more than 60 years and is home to two custom-built brewhouses: a 10-barrel brewhouse and a 100-hectoliter brewhouse, both of which are set up to brew and ferment different styles. The 10-barrel system is the small-batch experimental brewery, while the 100-hectoliter system will initially brew Guinness Blonde for national distribution.

Led by Brewmaster Peter Wiens and Head Brewer Hollie Stephenson, the Maryland brewing team has already begun producing beers for the on-site taproom. While the majority of beers will be available exclusively in the taproom, a few brews will make their way to the greater DC, Maryland and Virginia areas, with some even rolling out nationally.

Beginning tomorrow, visitors can tour the 10-barrel brewery and try the beers made on site.  The initial line-up will include: “Guinness IPA,” a hit in the Test Taproom; and “Crosslands Pale Ale,” a beer made entirely with Maryland-grown malted barley and hops.

While many Guinness classic stouts, including Guinness Draught, Extra Stout, and Foreign Extra Stout, will continue to be brewed at St. James’s Gate in Dublin, guests can enjoy them responsibly alongside the new American innovation beers in the brewery’s taproom. The exact number of beers on tap will vary, but there will typically be more than 15 beers available at one time.

All beer sales and sampling will be limited to guests 21 years of age and over, but the destination will offer fun for people of all ages. The brewery’s restaurant, led by Executive Chef Sam Anderson, is slated to open later this summer, and the menu will take inspiration from popular local dishes and Guinness’ unmistakable Irish heritage. Leading up to the restaurant’s debut – and even after it opens – guests can order casual bar fare in the taproom, or enjoy some of Maryland’s finest food trucks, which will often be stationed on the brewery grounds. The Open Gate Brewery & Barrel House also includes a performance area for future concerts and local community events.

Starting opening weekend, Guinness partner Lyft will set up a permanent pickup lane at the brewery to facilitate convenient and responsible rides home as a part of Diageo’s commitment to responsible drinking and Lyft’s Ride Smart initiative.

Upon opening to the public, the brewery will offer free self-guided tours, and later this summer will also begin to feature guided tours with beer tastings for $10. Taproom entry and access to the restaurant and outdoor grounds will be free of charge. Once guided tours begin, tickets will be available for purchase on site, but Guinness recommends buying them ahead of time at www.GuinnessBreweryBaltimore.com. At the outset, Open Gate Brewery & Barrel House operating hours will be Monday-Friday, 3-9 p.m. ET, and Saturday-Sunday, 12-9 p.m. ET.

About GuinnessThe Guinness brand was established in 1759, when Arthur Guinness signed a 9,000 year lease on St. James’s Gate Brewery in Dublin.  Brewed using four main ingredients, water, barley (malted & roasted), hops and yeast, Guinness is the world’s most popular stout brand. The iconic beer is brewed in 49 countries worldwide and sold in over 150 with almost 9 million glasses of Guinness beers enjoyed every day around the world.  The most GUINNESS is sold in Great Britain, Ireland, USA, Nigeria and Cameroon. More information can be found at www.guinness.com.

About DiageoDiageo is a global leader in beverage alcohol with an outstanding collection of brands including Johnnie Walker, Crown Royal, Bulleit and Buchanan’s whiskies, Smirnoff, Cîroc and Ketel One vodkas, Captain Morgan, Baileys, Don Julio, Tanqueray and Guinness.

Diageo is listed on both the New York Stock Exchange (DEO) and the London Stock Exchange (DGE) and our products are sold in more than 180 countries around the world. For more information about Diageo, our people, our brands, and performance, visit us at www.diageo.com. Visit Diageo’s global responsible drinking resource, www.DRINKiQ.com, for information, initiatives, and ways to share best practice.