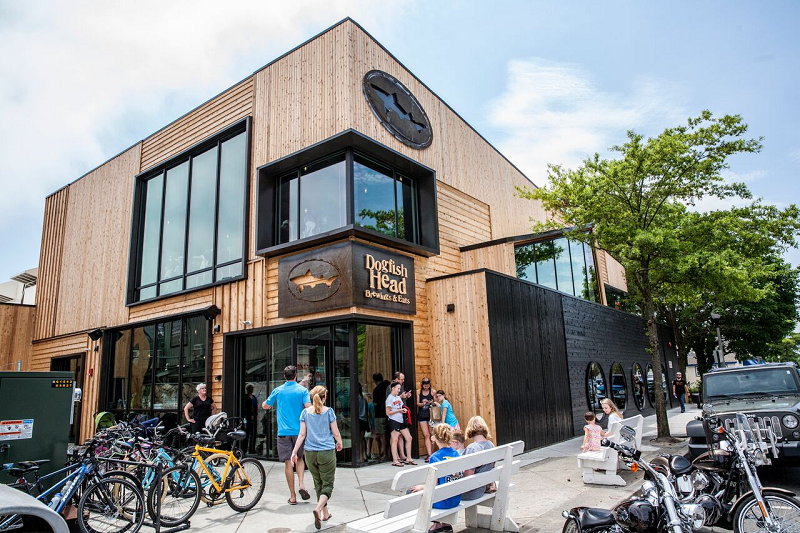 Off-centered goodness was already coming from the taps and the kitchen at Dogfish Head’s new brewpub in Rehoboth Beach, Delaware, yet there was founder Sam Calagione, paintbrush in hand, applying the finishing touches. Calagione, who had weeks before been named Outstanding Wine, Spirits or Beer Professional by the James Beard Foundation, was slathering yellow lyrics over large, black-and-white canvases from other musicians in an artistic mash-up of New York hip-hop and punk (Gang Starr lyrics over Lou Reed, Run DMC over Blondie, Ramones over Afrika Bambaataa). Since it’s not often you interrupt the leader of a large company in the middle of an art project, we started there. 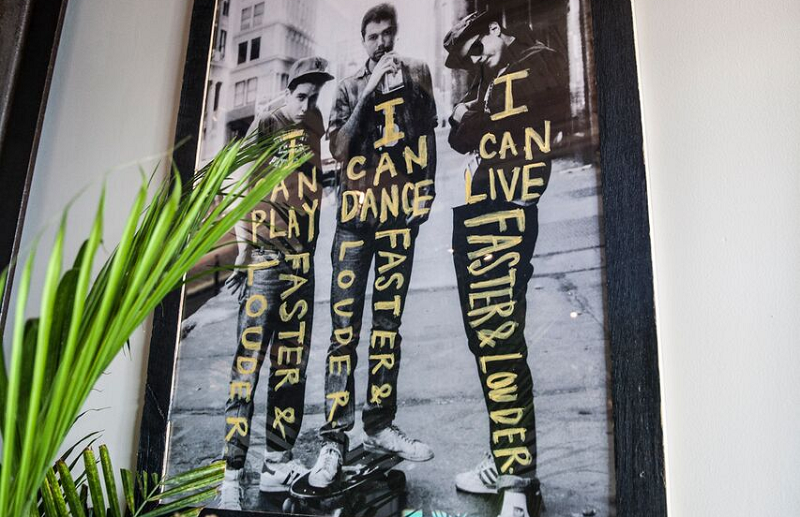 How important is it to have that hands-on approach?

Twenty-five years into it, I still consider myself a brewer first and businessman second. When I come back into the country, I always look forward to that moment coming back into customs, where they ask you to write out what you do for a living and I can write brewer on that form. I hope I’m doing that when I’m 90 years old.

On the other side, back when we were tiny, I never thought I’d get so much joy out of building a team of awesome leaders and learning from them or trying to entice really talented people with complementary talents to join our leadership team. I spend a lot more time on that sort of communal people leadership team journey here than I did when we were literally a mom-and-pop company 22 years ago.

And 22 years ago, you probably didn’t expect to win a James Beard Foundation Award.

It was obviously a wonderful moment for our company. It doesn’t seem that weird now, but when Dogfish was just getting going in the mid-’90s, I wrote a business plan that centered around this concept that we wanted to be the first commercial brewery in America committed to brewing the majority of our beers outside the Reinheitsgebot using culinary ingredients. There are so many breweries making beers outside the Reinheitsgebot lines today, and I love that. It’s exciting as a beer drinker, but it also does sort of validate the journey that we’ve been on.

I can tell you that the first few years Dogfish was open, we were not considered cool or a cult, beloved brewery. We were considered weirdos and heretics. By some people, we were considered jerks. I’d go to beer festivals and beer lovers would literally yell at me and say, “Why’d you put chicory in a stout, or apricots in an IPA? That’s disrespectful of those beer styles.” I think winning that James Beard award was just a full-circle moment to say that collectively our community is proving that beer is just liquid food and should be defined as part of a culinary journey we’re all on as humans. 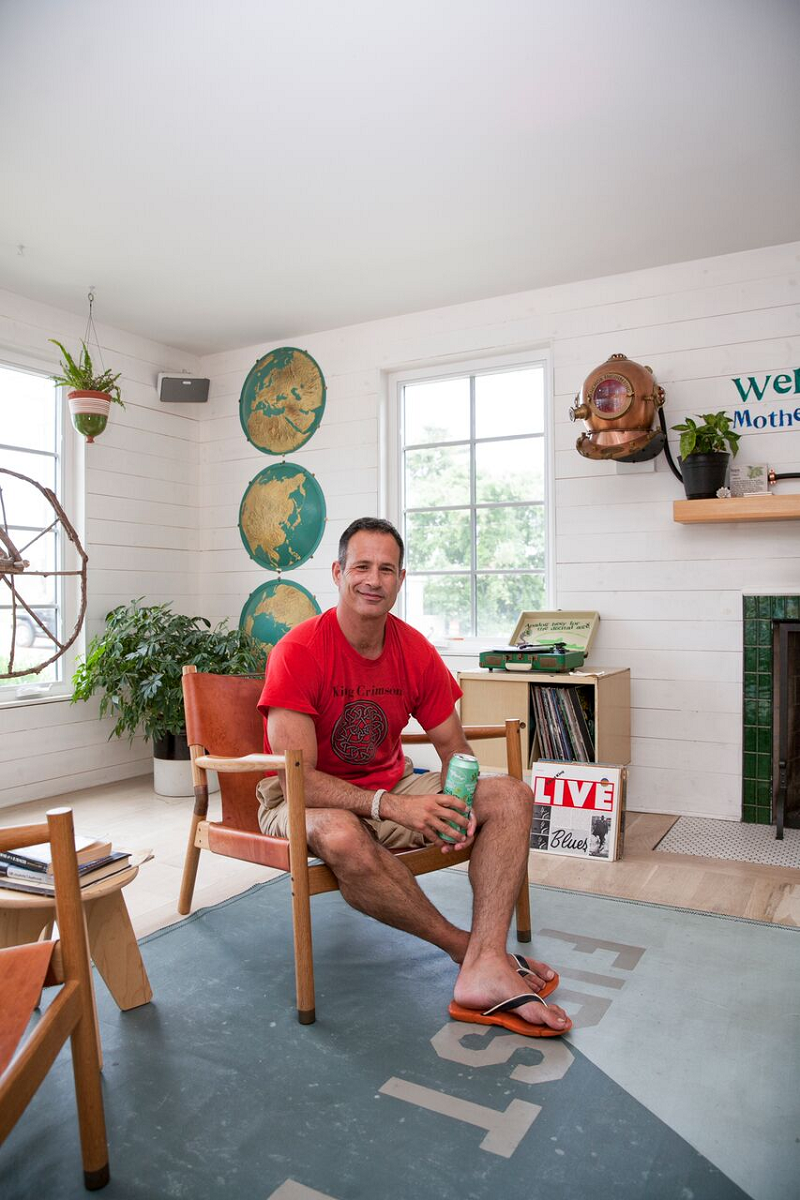 Sam Calagione at the Dogfish Inn in Lewes, Delaware. (Photo by Jeff Quinn)

You’ve long championed beer as worthy of being on the same level as wine. Do you think we’re there yet?

I don’t think we’re there yet. I think as a community we still have way more room to grow. Some components of our collective trajectory right now are heartening, like the fact that the average American now lives within 10 miles of a local, independent craft brewery.

But there are also components of where we are today that are disheartening. For example, the world’s biggest breweries are marketing beers as if they’re made by little American craft breweries, but selling them at cut-rate prices, which is confusing to consumers who expect some correlation between pricing and quality. In the wine world, I think regardless of what the biggest wineries are doing, consumers are much more willing to appreciate the stratification of wine prices. It’s getting challenging because the world’s biggest brewers have chosen to sell beers they’re marketing as craft beers as low-price beers. From a competitive perspective, it makes sense. They’re public companies that want to decimate competition, and they have economies of scale that other true indy craft breweries don’t, so it makes sense. I just wish all breweries would market their beer with greater transparency and authenticity in terms of who truly owns the brand.

You got yelled at for putting fruit in IPAs, and now everyone’s doing it. Dogfish Head has always been about brewing “off-centered ales for off-centered people,” but that center has shifted. How do you continue to make off-centered ales and innovate in today’s market?

There’s this Emerson quote that’s the long version of our “off-centered goodness for off-centered people.” One phrase in it talks about how we’re on this exploration of goodness. You’re right that with so many other breweries now making beer outside the Reinheitsgebot, it’s harder creatively finding a white space with a beer recipe or concept in a world that’s exponentially more adventurous throughout the commercial landscape than when we came up with Raison D’Être in 1996 or Chicory Stout 22 years ago—I don’t let that bum me out when I Google a concept and someone else has it. It just makes us better brewers.

Our goal is to never follow what other brewers do, so we’re still on this exploration of goodness rather than following someone else’s path. That’s never been our journey. I love that hunt of coming up with a concept and not just seeing if you can pull it off as technical brewers or distillers or chefs, but to do something that’s never been done before is really what I think consumers and beer lovers appreciate about Dogfish. If you look at what year Dogfish came out with a fruit-infused Berliner weisse, or what year Dogfish came out with a coffee stout, or what year Dogfish came out with a fruit-infused IPA, that pioneering approach kind of speaks for itself on the timeline of when we’ve done those things, so I think it kind of validates when we do something new that we’ve really done our homework to show that it’s not something that’s been done before. I think people really appreciate that even more today than when we were one of the only breweries making beers outside the style guidelines two decades ago. 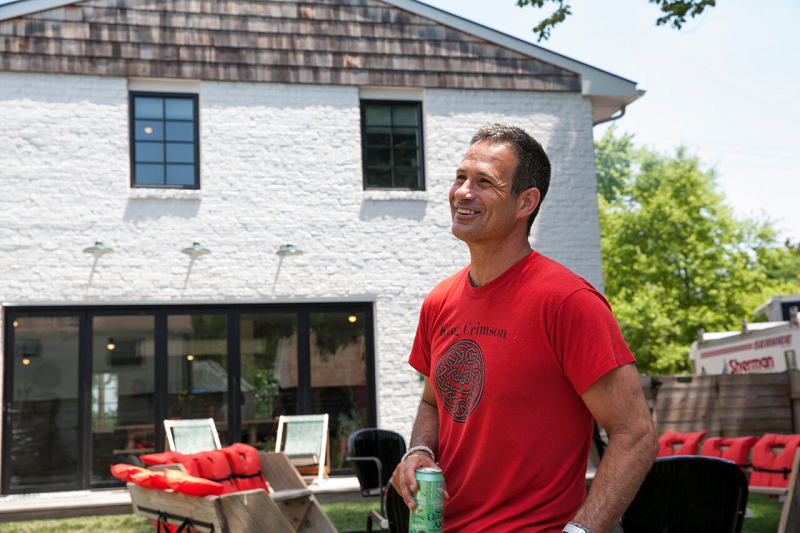 You mention always wanting to lead, never to follow. I read in another interview that you don’t read beer publications, because you don’t want to be influenced by other breweries. Is that still the case, and how difficult is it to avoid that influence when you’re constantly working with and meeting other brewers?

I’m friends with all generations of folks that have run All About Beer, I’ve got a book coming out with the Alström brothers as my co-authors, and I love the journalists in the industry who really do the hard work of spreading the stories of what makes brewing exciting. I love that community, but yeah, I try not to read beer publications because I don’t want to even be subliminally influenced about what I’m excited to experiment with next.

That’s still true, but basically every Saturday if I’m not traveling for work, I go to my hotel for happy hour, and I sit around the fireplace outside if it’s nice out, inside if it’s not, and listen from the kinds of people who care enough about beer to plan their vacation around staying in a beer-themed hotel. It’s really one of my favorite meetings of the week. People bring and share beers from all over the world. We all swap beers and listen to each other talk about what’s exciting us in the beer industry. I ask them what they think Dogfish is doing really well and what they’d want to see from us. I’m not saying we’re impervious or I’m disinterested in external influence on our journey, but I’d rather get it from Dogfish evangelists than a press release from another brewery.

We’ve seen so many breweries retooling their IPAs, brands that have often been around for years. Do you feel any pressure to alter iconic beers like 60 Minute or 90 Minute?

That’s not something that’s in our creative conversation, as we’re finishing the 2018 beer calendar. 60 Minute is growing, our two fastest-growing beers are Flesh & Blood IPA and SeaQuench Ale. 90 Minute is more challenging, but I believe it was the first bottled beer that was called an Imperial IPA on the label when we started doing it in 1999 or 2000. We’re really proud of that beer. While Imperial IPAs as a subcategory under IPAs aren’t growing as fast as fruit-infused IPAs or session IPAs, we’re not going to walk away from our heritage. It has an important part in our portfolio, but we’re also not going to just keep doing 60 and 90 and say that’s it, that’s what we’re known for.

We’ve always intentionally controlled our portfolio with the goal of never letting 60 Minute, our best-selling beer, become more than 50 percent of our sales, which would be very counterintuitive if we were a massive public company. For us, as a company that wanted to be known for creativity and innovation, we didn’t want to be turned into a one-trick pony.

When you think about innovation, is it harder or easier to innovate now or when you were the smallest brewery in the country?

We don’t do much with focus groups, but we’ve always had our brewpub. That’s how we wanted to do our R&D. We didn’t want to do it in a vacuum; we wanted our customers to be part of our R&D process. Then they see us incorporating that feedback into future batches of beer, and they feel a sense of ownership and contribution to our creative process. That, I think, is at the heart of our brand at Dogfish and why we thrive year-round in a coastal community. People are excited to contribute to our creative journey and not just buy it from the outside. They are part of it from the inside.

–This interview was conducted and edited by Daniel Hartis.

Sam Calagione: At A Glance

Beer that inspired him early in life: Chimay Red

Couldn’t live without: My radio. (OK, really it would be Spotify, but I wanted to sneak in an LL Cool J lyric.)

Favorite place to have a beer: Sipping a SeaQuench Ale standing shoeless where the land meets the sea at Dogfish Head, Maine.

Wishes he could buy a round for: David Foster Wallace, Ian Curtis, Ernest Hemingway and Vic Chesnutt.

Biggest passion besides brewing: Reading, writing and not doing arithmetic.

Keeping him up at night: A black lab named Moxie … bitch always be hogging the sheets.