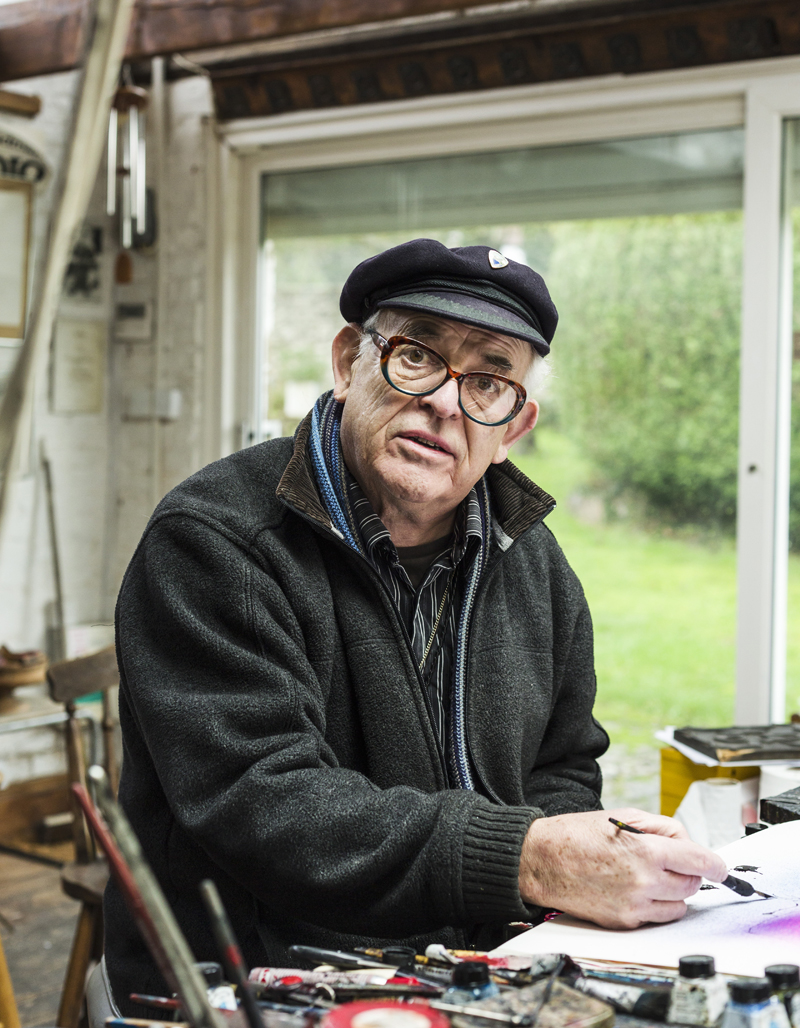 It is good to see Ralph Steadman in America.

Because had the venerated painter of beautiful grotesqueries made good on his threat to never return, the First Amendment to the U.S. Constitution would be weaker for it.

In the early 1970s the Englishman Steadman, now the go-to artist for Flying Dog Brewery, found himself in Newport, Rhode Island, with a new friend. One night he clambered into a rowboat, propelled by this friend, with the purpose of spray-painting “Fuck the Pope!” in red onto the white hull of an America’s Cup yacht. Spotted by armed security, the pair escaped only after the friend blasted orange volleys from an emergency flare gun to terrify their pursuers. Then the friend smuggled Steadman onto a jet to New York City. He landed penniless, shoeless and crazed.

“I got a letter saying he’d never come to this country again, and certainly not as long as I was here,” the friend told an interviewer in 1974.

That friend, of course, was Hunter S. Thompson, the late, hysterical Gonzo journalist whose searing embrace of the freest of free expression found its perfect visual pairing in Steadman’s art. 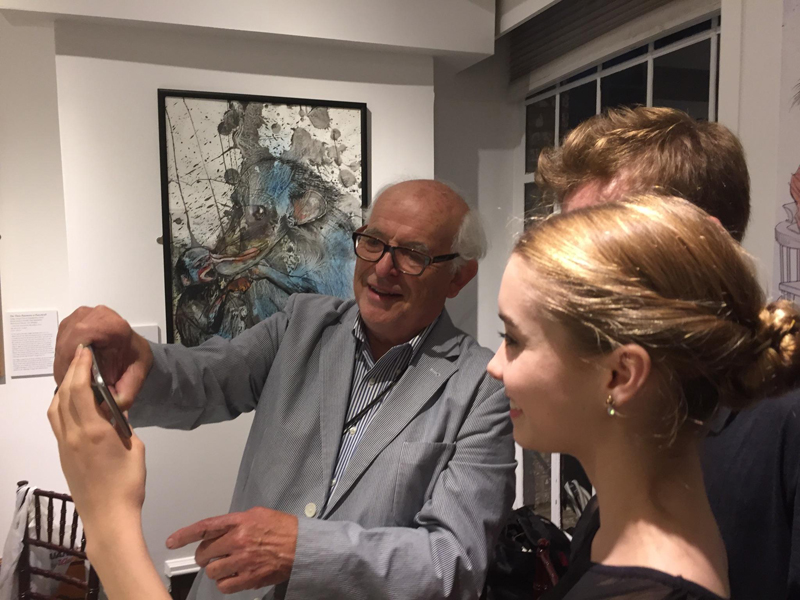 Steadman, 80, was guest of honor on the Upper East Side of New York City in September for a career retrospective at the Society of Illustrators. He wore brown loafers, a sport coat and a striped dress shirt with talismans hanging around his neck. All four floors of the cozy and well-lit gallery’s walls were adorned with his phantasmagoric images. So were the bottles of Flying Dog beer handed out from buckets of ice at the opening gala.

“It’s fatuous nonsense, a prissy approach to something,” he said in a warm English accent when asked about the Flying Dog lawsuits. 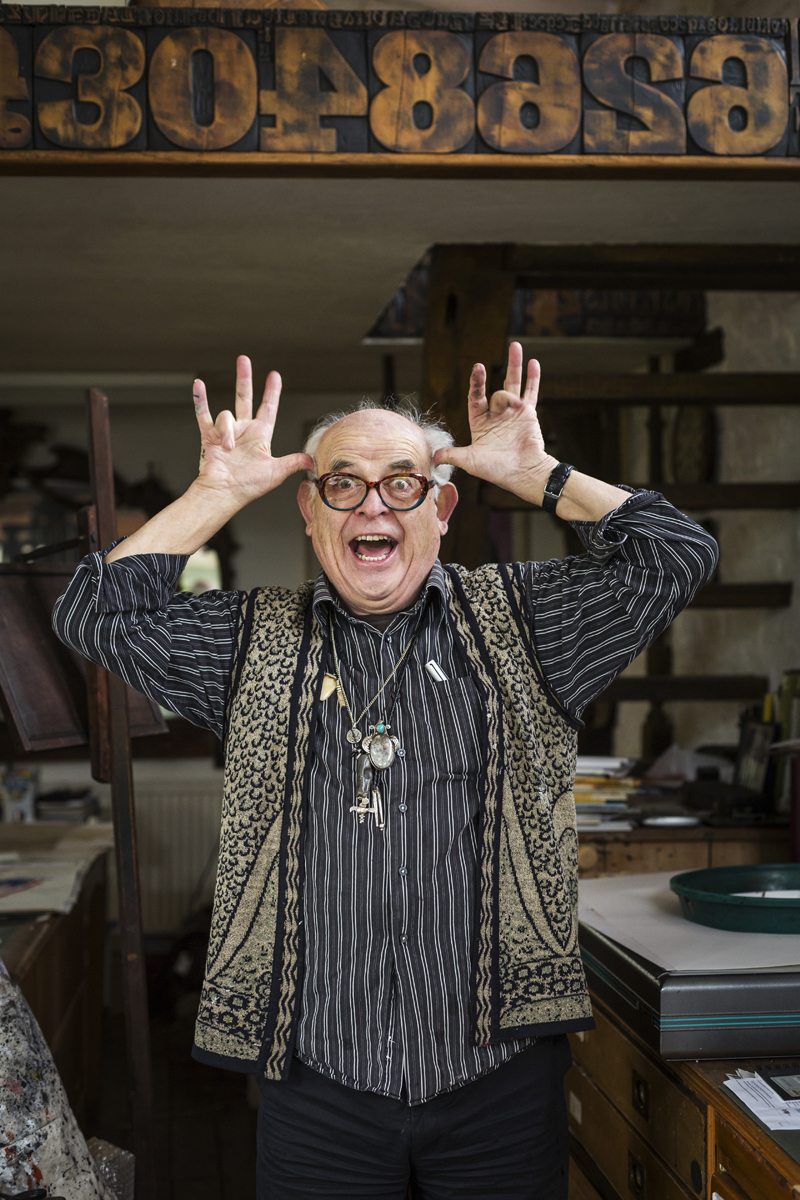 In 2009 the Michigan Liquor Control Commission banned Flying Dog’s Raging Bitch IPA because of the word “bitch,” which in Steadman’s hands became a red scrawl above an image of a hallucinogenic, devilish canine. The label was, the commission ruled, “detrimental to the health, safety and welfare of the general public.”

Jim Caruso, CEO of Flying Dog, which is based in Frederick, Maryland, said at the gala that he had reflected on the fact that Michigan is a state whose musical contributions to the First Amendment domain include such raging acts as the MC5, Iggy Pop, Ted Nugent and Eminem. This line of thinking led him to wonder if a state could yank from liquor stores a beer called “Raging Bitch,” might it next pull from record stores the classic Miles Davis record “Bitches Brew”?

“Freedom of speech is always under attack,” he said, a sweating Raging Bitch in hand. He added that his grandparents had fled Russia for the freedoms offered in America. “You’ve got to push back; regulators have to operate within the constitution.”

But the Michigan case was not even Flying Dog’s first Steadman-involved dust-up with censors.

Fifteen years earlier, Caruso asked Thompson—a regular he became friends with at the Woody Creek Tavern in Pitkin County, Colorado—to introduce him to Steadman. He wanted a striking logo for his new brewery. Steadman painted the V-image that looks like a butterfly from hell or a bat through a kaleidoscope that is now the official emblem of Flying Dog.

“This was breakthrough art for the beer industry in 1995,” Caruso said. “We see it and we were like, ‘We love it!’ It was just so entertaining and funny.”

When those words appeared on beer labels, the Colorado State Liquor Board banned them. This meant pulling from shelves bottles of Doggie Style Pale Ale and Road Dog Scottish Ale. Caruso sued the state and was joined in his lawsuit by the American Civil Liberties Union. Meanwhile, he tweaked his labels to read, “Good Beer, No Censorship.”

“This is about so much more than a beer label,” Caruso said. “It’s a huge, big fucking deal.”

Steadman, meanwhile, with the bemused and creative kookiness that made him both great company and a perfect artistic foil for Thompson, rambled about the mad dog bureaucrats who tried to censor him.

“How stupid they were,” he chuckled. “They seem to think you can’t possibly put that on a beer label. That was quite actually a bit of fun, ‘Good Beer No Shit.’ ‘What? I’m a shit expert you mean?’ I try not to say the word too much, any more than I like to say ‘Trump.’ That word was a fart once! Donald Fart. All dogs show their private parts, don’t they?”

A pair of teens approached Steadman and asked if he would try a new artistic medium with them—a selfie. “I thought I was a bit of a visual polluter,” he told them. Then a last tangent of questions. Could we soon expect from Flying Dog, say, a barley wine called “Fuck the Pope?” He laughed. And what did he remember about climbing in the boat that night with Thompson?

“Hunter asked, ‘Are you religious?’” he said. 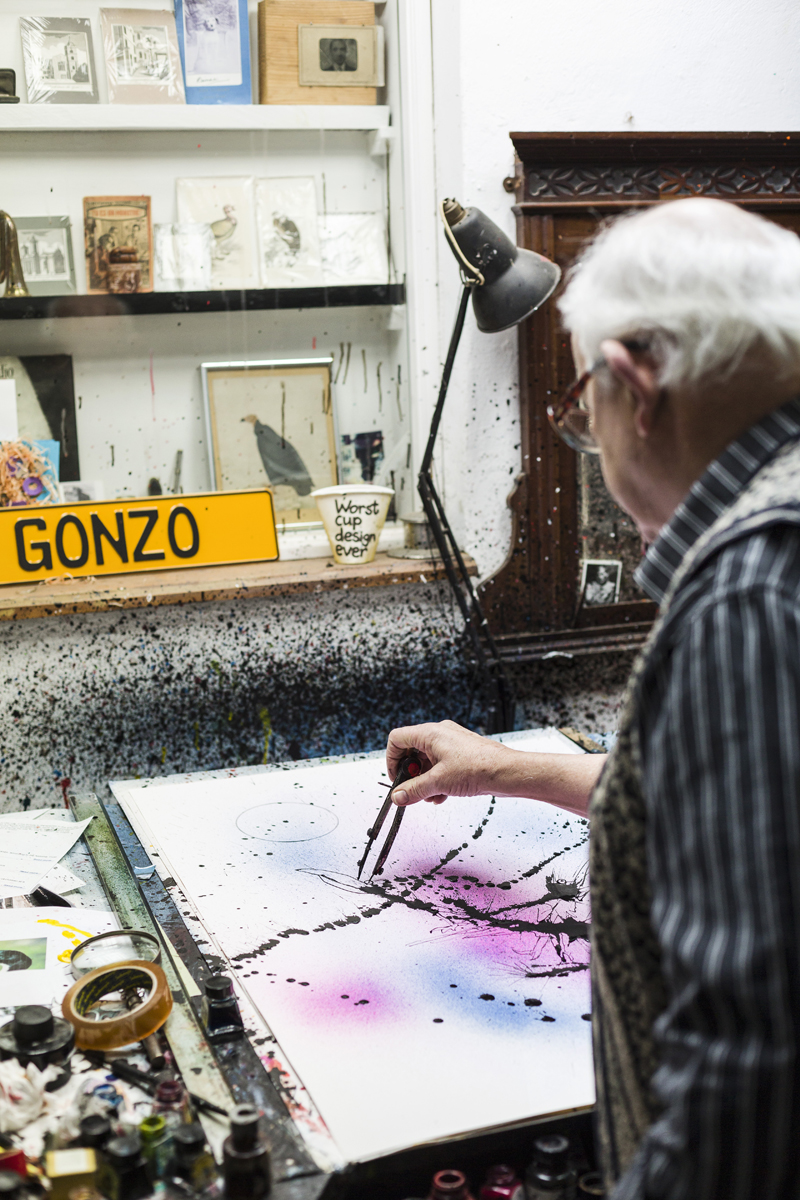 Nate Schweber
Nate Schweber is a freelance writer from Missoula, Montana, now based in Brooklyn, New York. His work has appeared in the New York Times, and he is the author of Fly Fishing Yellowstone National Park.