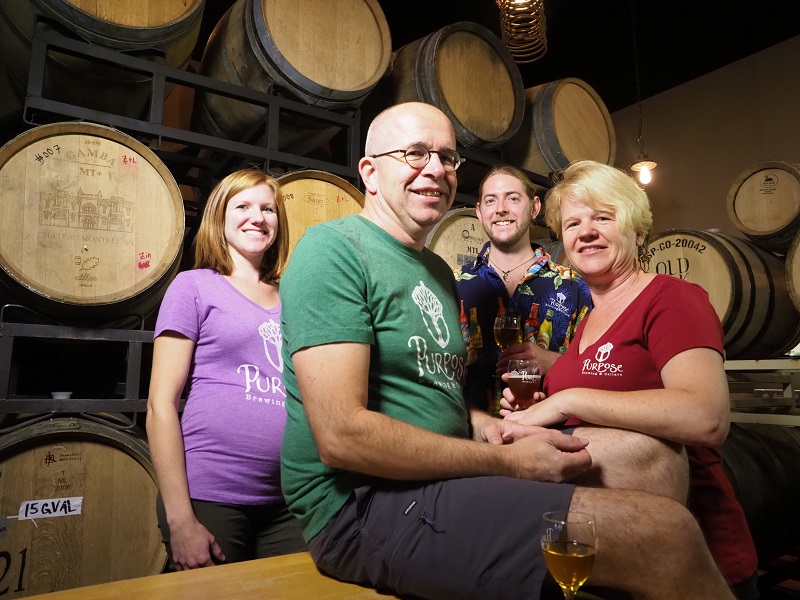 The owners of Purpose Brewing and Cellars: Peter and Frezi Bouckaert (front), and Laura and Zach Wilson. (Photo by Tim O’Hara Photography)

For as long as he has worked in beer, Peter Bouckaert has also worked in wood.

He spent a decade early in his career at Brewery Rodenbach, a brewery with several cellars filled with large, oak foeders containing sour ales. Later he would grow his own “foeder forest” at New Belgium Brewing Co., where he aged beers like La Folie long before America developed a thirst for sour beers. He even co-authored a book on barrel-aging—“Wood and Beer: A Brewer’s Guide”—with Dick Cantwell in 2016.

And it was around wood that Bouckaert charted his next course. Circling a campfire at Jester King Brewery in Austin, Texas, he and Zach and Laura Wilson of 1933 Brewing in Fort Collins, Colorado, discussed opening a small, community-focused brewery.

The Wilsons and Bouckaert, along with his wife Frezi, reopened 1933 Brewing as Purpose Brewing and Cellars in September of last year, quickly filling the small space with a variety of barrels. Since then, Bouckaert has been busy brewing with sometimes unconventional ingredients—spinach, sun-dried tomatoes and coconut flour, to name a few—and visitors will even find the longtime brewmaster manning the bar. We caught up with Bouckaert to hear more about his decision to leave New Belgium for a very different opportunity at Purpose.

All About Beer Magazine: What was it about Zach and Laura’s vision that resonated so much with you?

At one point they mentioned wanting to get on a farm, and that they wanted to stay small and be community members. They didn’t want to go shooting for the moon. That happens a lot with people.

And you’ve been through that over the last 20 years or so.

We started talking about a 10-barrel system, and I said, “No, I want it smaller,” and they said, “Why?” We really had to explore why we would do it smaller and if that would match with the vision going forward.

Do you think staying at that level of production is sustainable?

In my eyes, yes it’s sustainable. Especially with the influence that we have now. If you want to be in a long line of people getting into distribution—it’s a bottleneck, right?

How has your average day of work differed from when you were at New Belgium?

I’m not in meetings anymore, I’m actually doing things now. We’re only open four days a week, so I manage the bar two days a week of those four. Manage is a big word—I’m doing it. It’s that first line of interaction with the customer. We have only four beers over the weekend that we serve, and they’re always different. And they’re kind of crazy, maybe at first?

We have conversations with people on what they should try, and then get their direct feedback. Sometimes in the weekend we’ll even change the beer up a bit based on the feedback we had earlier. So it’s a short feedback loop.

And you probably didn’t get that at New Belgium.

Well, you got it. But you got it filtered through complaints and sales data. Really this is a one-on-one conversation with whomever it is I’m talking with at that moment.

Your cellar experiences and cooperage classes also allow you to have more of a hands-on role with your consumers.

Yeah, we’re in a 2,500-square-foot space and we do a three-hour tour. It’s a very customized tour. Sometimes we decide which barrel we’re going to put on next.

The cooperage class will be a fun one. If you’re interested in cooperage, it’s a fun night going out and having a beer. There are quite a few people who sign up who are really geeking out over barrels. It’s a small setting and can only be 10 people because everyone needs to do certain parts of the process. 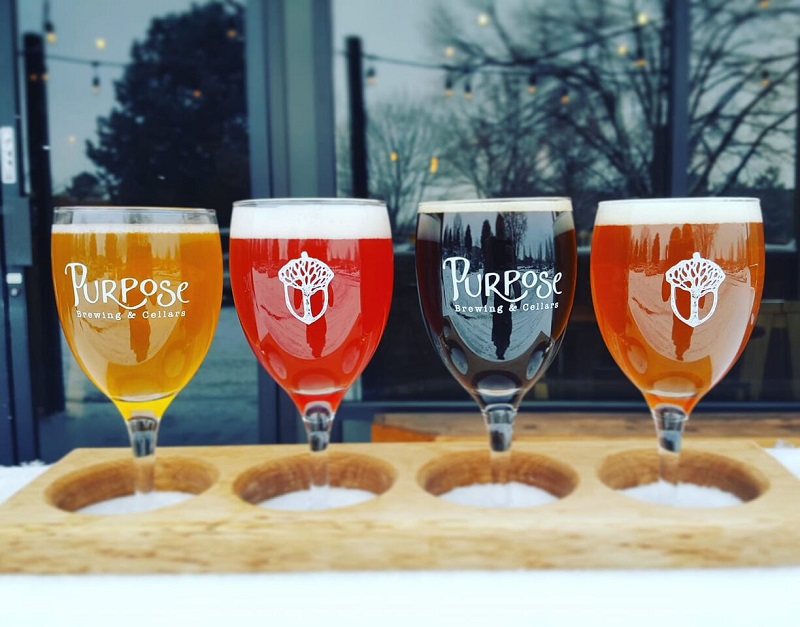 You mentioned your beers may at first seem “crazy” to some. When it comes to your approach to brewing, what is your philosophy?

Yes, maybe we’ll use crazy ingredients or interesting ingredients. But we act as a chef, so we’re not going to make the spiciest beer out there, or use the weirdest ingredient out there. If we use these ingredients, we’re doing it to make a dish that is going to be beautiful. To me, it’s more the chef part.

When I first brewed La Folie, no one really understood what it was about. To be able to run such a niche brewery in Purpose now and to have customers who are willing to expose themselves to it or travel for it—we’re living in heaven right now.

Can you tell me more about the Smoeltrekker beers?

There’s a Smoeltrekker number, and it’s the barrel that it comes from. This week we’re serving Smoeltrekker 68, so it’s barrel 68. Sometimes we serve it straight from the barrel, sometimes we carbonate it up—it depends on how that beer is, how it serves and how it’s best.

What’s been the most satisfying thing so far at Purpose?

This is quite a beer savvy town. It’s a beer savvy world out there, and people love to come in and taste what we come up with every weekend. And that has been really satisfying to me. It’s so much fun to play around with so many directions, and then people give it a try.

I know your goal is to stay small. Are you still pursuing a farm location?

We are looking at different locations. The issue with farms is that we are looking in Fort Collins. Most of them would need serious upgrades to the extent almost that it’s better to build new. If you want to go 50 miles east of here in a rural county we could do it right away. But we want to be part of Fort Collins. We love Fort Collins.

This interview was conducted and edited by Daniel Hartis.

Peter Bouckaert At A Glance

Chief Wisdom and Other Nonsense / Co-Owner/Brewmaster

Years in brewing industry: 31
Go-to beer from another brewery: Zwei Pilsner
Beer that inspired him early in life: Rodenbach
Couldn’t live without: My wife and kids
Favorite place to have a beer: Campfire
Wishes he could buy a round for: Antoon Lietaer, brewmaster at Belgium’s Anglo-Belge Brewery
Biggest passion besides brewing: Barrels
Keeping him up at night: Too many things