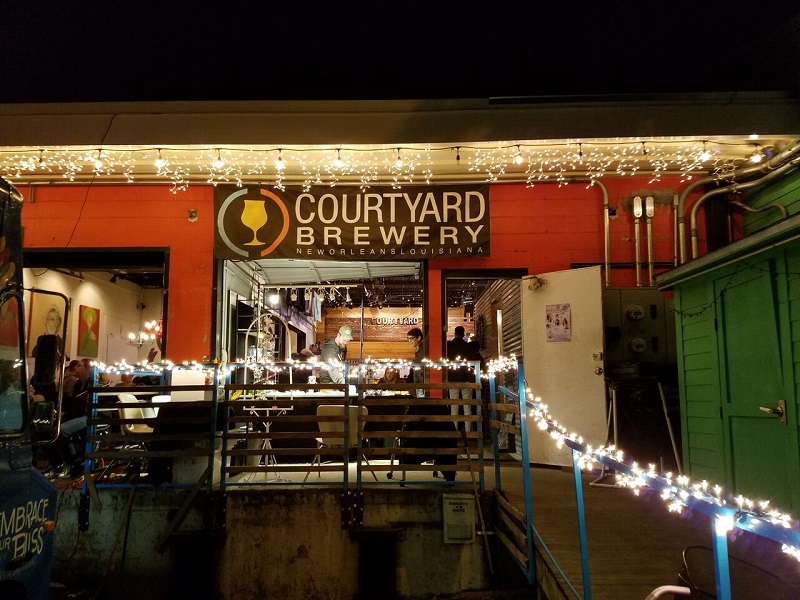 Courtyard Brewery’s tiny warehouse space sits in the shadow of the Crescent City Connection, linking the East Bank (which is on the west side of the river) to the West Bank (on the east side on the river). It’s the most traveled bridge across the Mighty Mississippi, and by the time Courtyard (1020 Erato St.) opens its doors during the week at 4 p.m., the bridge is crammed with people leaving the city after work.

If impatient commuters could look down, they’d see a reason to take a break and wait for the traffic to ease. Because in a city known for its uniqueness, Courtyard has carved out a special place worth diverting from the well-trodden path. This is thanks to owner and brewer Scott Wood’s San Diego-influenced beers.

The taproom and outdoor space have grown like an organism, in a DIY, funky-haphazard fashion: corrugated tin walls, reclaimed wood and a patch of artificial turf hung on a wall. Folding chairs move in various configurations so that neighbors, tourists and beer nerds alike can converse while enjoying Preach!, Wood’s Citra-heavy, hop-candy-sweet double IPA, or Prose vs Poetry, a mild and malty ESB that Wood created to appease a local British expat, as well as appeal to those who seek Abita Amber.

Courtyard Brewery’s focus on beer over marketing has evolved into an eccentric run of unusual collaborations with local restaurants as well as events that appeal to the folks running the asylum-—who hope the customers come along for the ride, but not really caring as long as they have fun.

During the darkest week of the year, Courtyard provides intoxicating performances and artist interactions for the Dark Hours, as Wood has dubbed his celebration leading to the winter solstice. 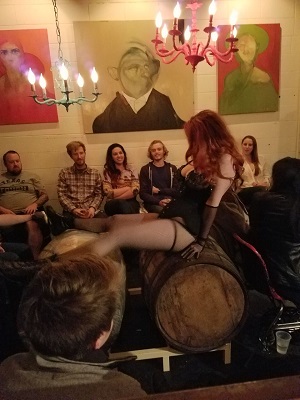 One night in December’s weeklong rage against the dark crackles to life with a burlesque performance in the brewery’s art gallery/seating area. A New Orleans native and Courtyard regular, known in the burlesque world as Elle Diablo, introduces several nationally known performers including Minxie Mimieux, the Texan Tigress of Tease, and sword swallower Eli Rose, the Debonaire Mystic, who doesn’t dance but does provide his own bed of nails.

Maybe a beer, then?

Six nights later on the solstice proper, burlesque’s metaphorical heat gives way to the literal flames of glassblowing. Local glassblower and homebrewer Andrew Pollack set up a temporary studio and display area for his fragile final wares. Despite the questionable wisdom of combining consumption of alcohol with the glowing jet-engine heat of molten glass, nothing disastrous happens that night.

The blue-orange turbocharged flame used to blow glass is both mesmerizing and comforting, evoking a sense memory of safely curling up in front of a roaring fire, protected from the cold. Since those moments don’t really exist in New Orleans—that week it hovered in the 70s—it’s a heat-free way to achieve the same sense of contentment. Watching the process of these delicate pieces and shapes created—forged from flame—echoes the solstice themes of rebirth and renewal.

Even though it’s a warm night, customers eschew the brick-paved outdoor courtyard and gather inside around the fire, drinking with friends, seeking light in the dark.

Most of Wood’s beer names come from books and poems from Beat authors like Jack Kerouac and William Burroughs. The dark, earthy Actual Void foreign export stout, reminiscent of the bitterest chocolate in creation, and 7,000,000,000,000 Light Years of Infinite Darkness Gulf oyster stout, with its dark malts, mineral brightness and sweet-salty finish, tells the tale of the solstice in fermented form.

Spring brings a more playful tone to the brewery—not only does Courtyard become a haven for costumed craziness that spills over from Mardi Gras parades rolling down nearby St. Charles Avenue, but also Wood has decided to celebrate the power of lupulin by creating the Louisiana Hops Festival, held on April 20 starting at 4:20.

It’s fitting that the event was created by Courtyard, well-known for hoppy and hazy beers made in small batches, and consumed with gusto by area hopheads. Wood created the state’s first triple IPA—You Already Know, a 10.5% juicy monster, triple-dry-hopped with 5 pounds per barrel of Simcoe and Mosaic.

Courtyard Brewery captures the New Orleans spirit of celebration with the sensuality of the city’s adopted style of burlesque and the danger and beauty of fire that lights the night and creates art. The DIY, art house feel of the brewery reflects its sense of improvisation, and the beer and entertainment within reflect the adventure that anyone can experience on any night of the year.