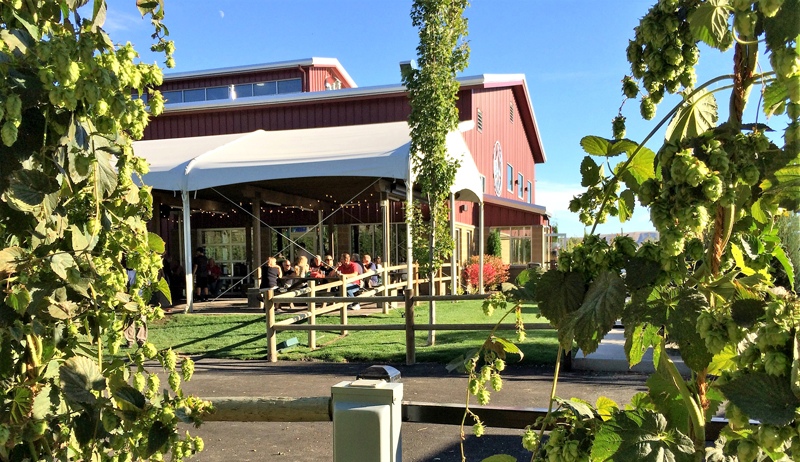 It’s not just farm-to-glass at Bale Breaker Brewing Co., it’s farm-in-the-glass, where you are encouraged to pick a couple of the Cascade hop cones growing just feet away and plop them in your ale. The sticky yellow lupulin powder loosens from its tight package of paper-thin petals, creating an extra fresh-hop kick in a pint already brimming with it.

This is Yakima Valley, self-titled hops capital of the world. The sun almost always shines here on the dry side of the state, as it is on a recent early fall afternoon.

The crowd at Bale Breaker (1801 Birchfield Rd., Yakima, Washington) is a mix of retired couples, young bearded guys in mesh-backed trucker caps and a few tourists (they’re the ones posing for selfies out by the hop bines in the yard). It’s hard to tell hipster from farmer around here—and maybe that’s because most are probably a bit of both. Farming is in the roots of everyone here.

The bar is constructed of wooden poles smoothed with years of use holding up hop bines, wrapped in rusted wire. Two gray-haired men are perched there, with the authority of regulars, sipping pints the same golden hue as the hills that hug each side of the valley encasing the green rows of hops, just outside the windows. Hop plants have been pushing up from the ground on this site for more than 100 years.

The sibling owners, Kevin Smith (head brewer) and Meghann Quinn, are part of the fourth-generation family that works these hop fields. They grew up just down the gravel road in Moxee. The town of 3,000 lies in the eastern corner of the valley in south-central Washington, where some of the world’s best land for hops, brought by end-of-ice-age floods, produces around 75 percent of the country’s hops.

The Smith’s great-grandparents planted their first bines in 1932, a year before Prohibition ended. Smith, Quinn and her husband, Kevin Quinn, created a direct connection to the farm for beer drinkers for the first time in 2013 when they opened the brewery, a separate entity from the farm, now run by an older brother and their parents.

As the afternoon bleeds into evening, families take up residence on the oversized picnic tables on the back porch, staking their claim with pint glasses and sippy cups. Their young children wander onto the sun-drenched lawn to find hula hoops and corn hole beanbags. It’s certainly not a rowdy crowd, although the soft hum of conversation is occasionally pierced with a child’s high-pitched laughter.

Topcutter, the flagship IPA, opens like a late-harvest alfalfa field. By the second sip, you’re rolling in the field, tasting its soil. Bottomcutter, an imperial IPA, recalls the Cascadian forest—the pitch of towering Douglas firs mixing with the sweet-smelling wildflowers that cover its floor.

A scrappy-looking chocolate lab scavenges for fallen teriyaki chicken, filling from the tacos bought at the food truck in the parking lot. A woman, cribbage board in hand, asks if the other end of the table is free. Bale Breaker is not only the closest a pint glass can get to farm-to-table, but also the perfect place to wind down the week on this warm Friday afternoon.

Editor’s Note: This story first appeared in the January 2017 issue of All About Beer Magazine.