Pull Up A Stool With Jeremy Warren 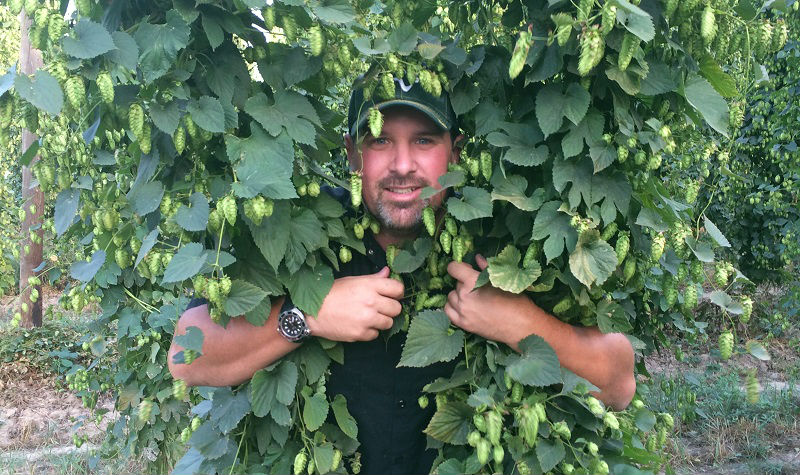 In July of 2015, Knee Deep Brewing Co. founder Jeremy Warren left the brewery he helped build. At Knee Deep in Auburn, California, Warren brewed a variety of hop-heavy styles like Breaking Bud IPA, Hoptologist Double IPA and Simtra Triple IPA. He’ll continue to focus on such styles at Revision Brewing Co., his new venture in Sparks, Nevada, but, as the name suggests, he’s doing some things differently this time around.

All About Beer: Why did you leave California and build Revision Brewing in Nevada?

Jeremy Warren: We were originally going to build in West Sacramento, California, but the industrial market was really challenging. We did find other locations in California that would work, but then I came back here where it all started. Not a lot of people know, but the first business license that Knee Deep ever had was from Sparks, Nevada, where we’re building our facility. When we came up here, we were able to find a nice stand-alone building that would accommodate us for our needs today and future needs, and then we kind of looked back, too, and went, “You know, there are states out there that when someone thinks of a state, there’s a brewery that comes to mind.” Wisconsin, it could be New Glarus. There’s not really a standout brewery in Nevada. It was an opportunity for us to maybe, hopefully become that brewery here.

Why part ways with a brewery you were so instrumental in building? Was it a matter of creative control?

For me, there were a few reasons. One of the reasons is that creative control. When I founded Knee Deep out of my garage seven years ago, there were some things that were like, “Hey, these are the things that I want to do, and this is why I want to do it.” As you grow a company, when you have a different business partner that then became majority owner, you lose full control of the direction of the company. For me, there were a lot of beers that I still wanted to develop. I still wanted to get very creative, dive into barrel-aging, sour production. That was one of the main reasons I left.

You brewed several popular hoppy styles at Knee Deep. With so many breweries now doing the same, how do you stand out in the market?

For us, we just take an extreme approach to it. There are a lot of beautifully done IPAs out there, don’t get me wrong, and I’ll drink them all day long. I think we just push the edge on the resiny flavors, the hop flavors, the hop aromas. We’re using a massive amount of hops to push that. We like our high-ABV beers as well. I think that’s what helps us in the market.

A lot of new brewers struggle with hop contracts. Were you able to avoid that, given your time in the industry?

Yes, hops were not an issue. We had some really good relationships with the suppliers that we had at Knee Deep. We’re fully contracted for almost four or five years now. We went into it with conservative projections, and now that we’ve been executing distribution agreements, we might need more hops. We have big suppliers telling us, “Hey, just get open, let us know what you want, and we’ll get you those hops.”

Any new hop varieties you’re eager to work with?

I really want to explore Comet a little bit. I know some brewers are blending it with Citra, so I’m curious to see how those are coming together. Other than that, I’m also looking to experiment with some of the cryogenically frozen hops that they’ve been pulverizing. It’s a new product for Yakima Chief, so I’ll get to look at some of that stuff. And then whatever they want to throw at us, we’re going to go for it.

You mentioned wanting to pursue barrel-aging and sours more.

We’re going to dedicate almost 4-5,000 square feet of our building just for barrel aging. In the first year, whenever we get a chance, we’re just going to fill barrels and just keep filling. I’d say within a year of opening, we’re going to grab a smaller warehouse down the road to do some more of the sour fermentations and keep it off-site a little bit. We love barrel-aging beers. We just can’t wait to start blending.

The name Revision implies a new start. What will you do differently this time? What will you take from your time at Knee Deep to apply to Revision?

Seven years of making mistakes [laughs]. One of the biggest things was that I handpicked our ownership team. With the brew house and design, I was able to learn from the mistakes I made in the past. We spent a lot of extra money on a nice bottling line. My biggest goal is to make sure no one loses motivation or focus of why they chose to get in the beer industry and to just maintain a very positive company culture.

You brewed a lot of very popular beers at Knee Deep. Can it be a blessing and a curse when you have to allocate much of the production to core beers instead of experimenting?

Yeah, that’s in the back of my head all the time. We’re launching with some pretty big heavy-hitter IPAs, but at the same time I’m hoping the demand isn’t so crazy that I’m forced into the same thing. “Oh, I’m going to have to scrap that project, or reduce this or that.” We built this system to only handle up to 24,000 barrels of beer. We wanted to force ourselves into not being able to make too much beer. We wanted to make sure that our product in the marketplace is fresh, the product integrity is there, that we have the systems in place internally and with our distributors to maintain that. So we created a ceiling so that way when we get there, then we can go back to the table and say, “All right, do we want to make another 20,000 barrels of beer? And if we do, how are we going to do that?”

Jeremy Warren: At A Glance

Beer that inspired him early in life: Pliny the Elder and Blind Pig by Russian River Brewing—I have a great story on this one.

Couldn’t live without: My family

Favorite place to have a beer: Any craft beer tavern that serves fresh beer and doesn’t have a bunch of Craft Holes in it.

Wishes he could buy a round for: Everyone. Great beer brings great people together.

Biggest passion besides brewing: Mountain biking and hiking, but a great beer is always required afterward.

Keeping him up at night: Thinking if I forgot to do something and stressing out due to the brewery build-out.

–This interview was conducted and edited by Daniel Hartis, digital manager of All About Beer Magazine.