Denver is a great beer city, but for a full Colorado experience, you’ll need to head west. The pleasures of exploring beyond Colorado’s Front Range population centers are many, including inspiring scenery, well-preserved 19th century Victorian towns, unlimited outdoor recreation and scores of local breweries well-entrenched in their hometown communities.

Colorado’s southwest region, in particular, possesses the best of what gives the state its unique character. A rich beer culture, of course, is an important part of the equation. The itinerary that follows will immerse you in Colorado’s visual, cultural and liquid assets.

As you roll in from the east, the first of three local brewpubs you’ll encounter is Riff Raff Brewing (274 Pagosa St.), a well-chosen lunch stop. Riff Raff sits on the first floor of a handsome Victorian residence built in 1898. Among the brewpub’s eight house beers is the “outlaw tap,” which dispenses small-batch experimental beers for those with adventurous beer palates. If your taste in burgers leans toward the untraditional, lamb, goat and yak versions are all available along with more standard beef and meatless options. 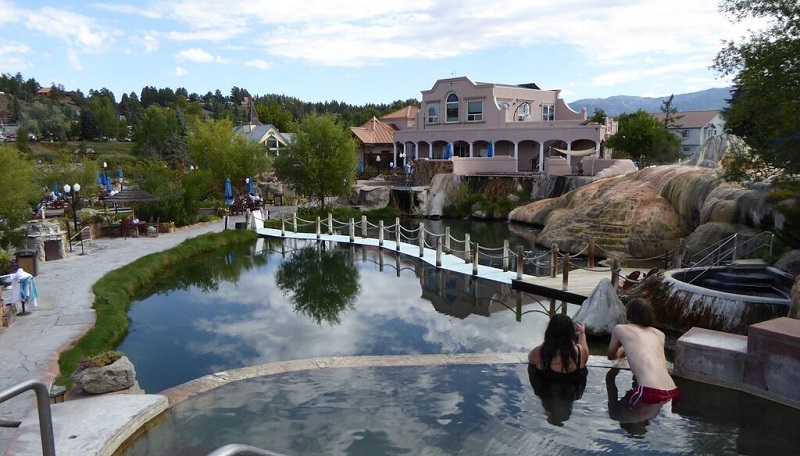 You’ve likely logged substantial highway miles to get to Pagosa. Work out the kinks from your drive with a soothing soak at nearby Pagosa Hot Springs (165 Hot Springs Blvd.). The tastefully developed mineral springs feature two dozen pools of varying configurations and temperatures overlooking the San Juan River.

Wolfe Brewing (2045 Eagle Dr.) is located a few miles west of downtown Pagosa. Though only two years old, the brewpub’s dark wood bar and back bar, pool table and sizeable beer can collection suggest a neighborhood watering hole of greater longevity. A dozen beer taps are roughly equally divided between house and guest beers. Though not for the pizza purist, the Reuben pie is a house specialty.

On the western fringes of town, Pagosa Brewing & Grill (118 N. Pagosa Blvd.) is the community’s original craft brewery. Twenty house beers offer an eclectic mix of familiar styles along with fruited, spiced, wood-aged and experimental concoctions. The walls of the bar area display an impressive collection of medals procured from national and regional competitions. The outdoor covered beer garden is quite large and both kid- and dog-friendly.

A breakfast visit to Pagosa Baking Co. (238 Pagosa St.) will provide the carbs you need to power through a morning round of disc golf on either of two attractive 18-basket courses. Both the hilly Reservoir Hill and flatter Cloman Park Disc Golf Courses are laid out in park-like stands of Ponderosa Pine. There’s no charge to use either facility. 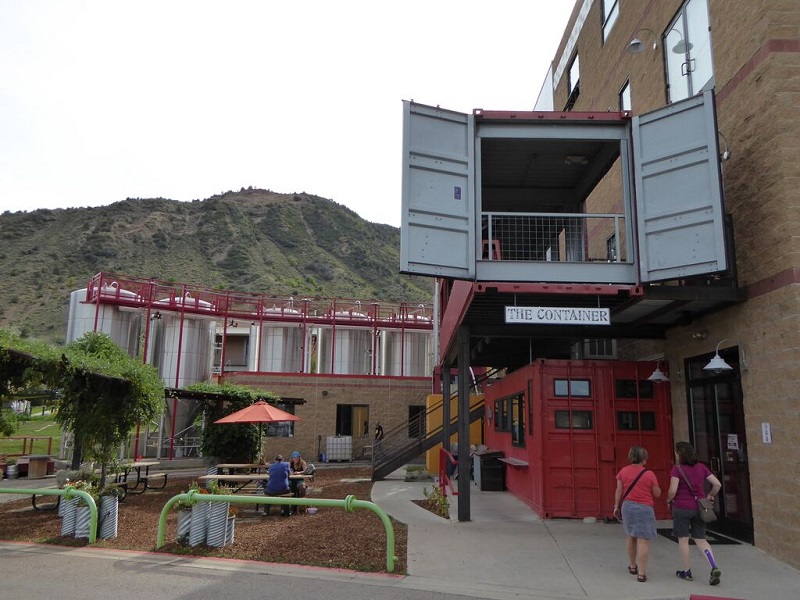 Ska Brewing (225 Girard St.), which sits about three miles from downtown, has grown from humble beginnings into Western Colorado’s largest production brewery. While Modus Hoperandi IPA and True Blond Ale are longtime crowd-pleasers, the recent addition of the Mod Brewery adds some unique small-batch experimental beers to the taproom lineup. Beet-carrot-ginger beer, anyone?

Four downtown breweries are located along a very walkable 1-mile stretch that takes you through Durango’s lively business district. Brew Pub & Kitchen (117 W. College Dr.) has a modern, stylish ambiance including abstract artwork created by the owner. The half-dozen house beers are listed in categories including Hop, Malt, Yeast and Session. Within each category, styles change frequently.

Twenty-year-old Steamworks Brewing (801 El 2nd Ave.) resides in a former auto dealership dating back to the 1920s. The glassed-in brewhouse sits on display in the middle of Durango’s largest restaurant. The brewpub features 16 house beers, most under 6% ABV. Steamworks beers have collected numerous prestigious awards over the years including a 2016 World Beer Cup gold medal for the Steam Engine Amber Lager. 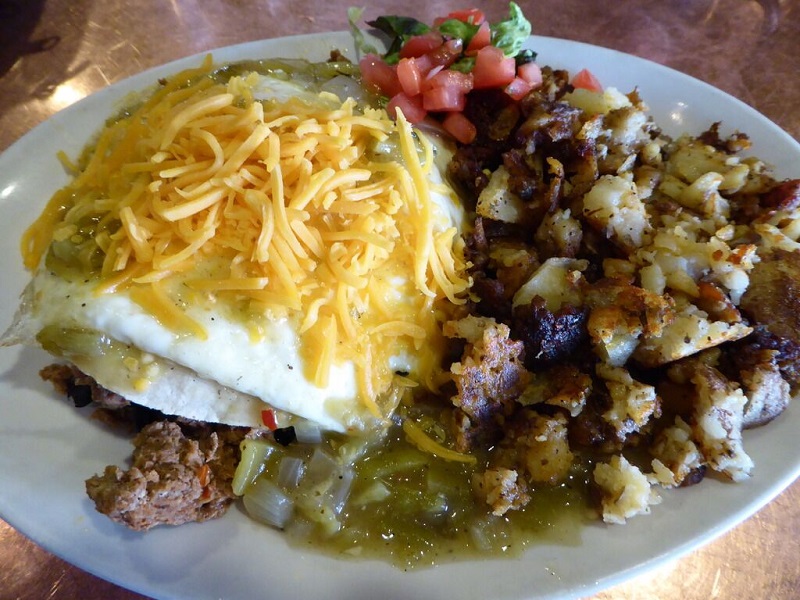 Carver Brewing (1022 Main Ave.), which began brewing in 1988, ranks as Colorado’s second-oldest brewpub. In fact, Carver was the first brewery to open in the Four Corners region following prohibition. There’s plenty of room to sample 11 house beers in the deceptively large space that includes two bar areas and a pleasant shaded patio. Surprisingly, Carver is also a popular local’s breakfast spot. Doors open at 6:30 a.m., but beer isn’t served until 7. 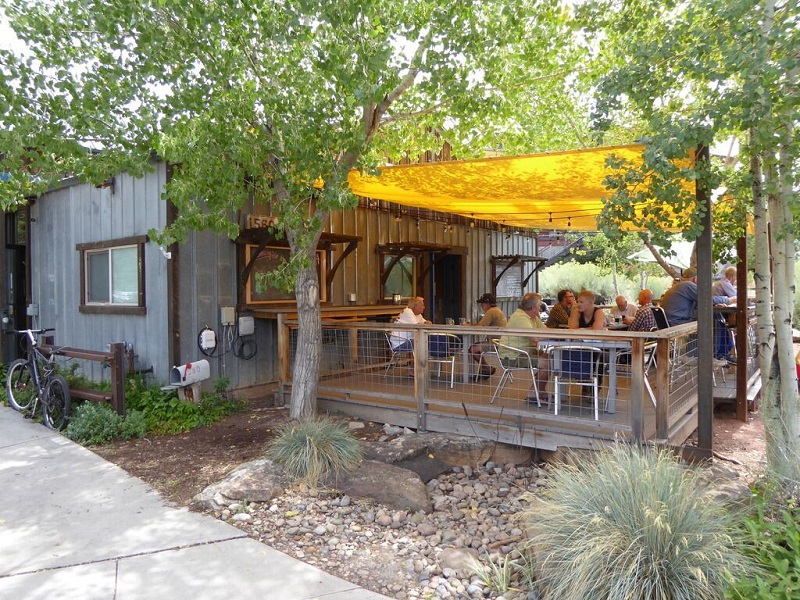 Two-year-old Animas Brewing (1560 E. 2nd Ave.), Durango’s youngest brewery, has built a solid fan base for its well-crafted ales and atypical food offerings such as Irish tacos (stuffed with bangers and mash) and corned beef pasties. With the brewpub’s riverside location along the bike path, patrons frequently arrive by bicycle and sometimes by raft or kayak. The current river level is posted on a chalkboard near the bar.

Durango Brewing (3000 Main Ave.), on the north end of town, is ramping up operations after an extended closure following a change of ownership. The new owners have spruced the place up and installed an inviting outdoor seating area. An updated food menu includes a Pint O’ Bacon appetizer. One thing that hasn’t changed is the award-winning Durango Dark, a smooth and satisfying rendition of the rarely-seen American dark lager style.

Following breakfast at Carver Brewing, stretch your legs with a walk or bike ride on the Animas River Trail. The multi-use pathway hugs the river bank for seven meandering miles through Durango. Then head north out of town on the San Juan Skyway, one of Colorado’s most popular scenic drives. As you climb into the San Juan mountains, nicknamed “the Switzerland of America,” the scenery becomes more impressive with each mile.

In about an hour, you’ll reach the summit of photo-worthy Molas Pass (10,910 feet) from which you’ll descend quickly into Silverton, home to 650 hardy souls and two high-altitude brewpubs. Golden Block Brewery (1227 Greene St.) opened in mid-2015 in a building dating from 1903. The original pressed tin ceiling remains intact and an assortment of old mining artifacts is on display. Among the more modern accoutrements are an Italian wood-fired pizza oven and a 7-barrel brewhouse producing up to six house beers, augmented with a variety of guest taps. 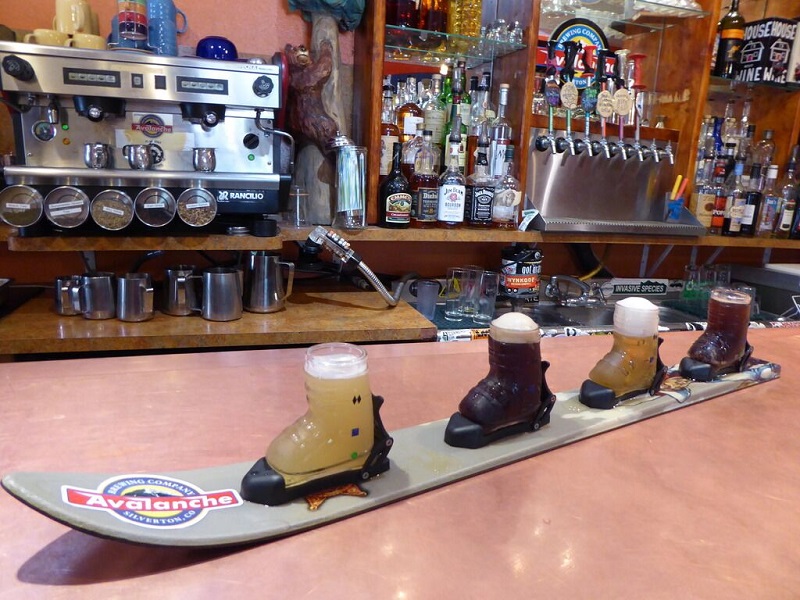 A flight at Avalanche Brewing (Photo by Dan Rabin)

You’ll recognize Avalanche Brewing (1067 Blair St.) by its purple and red exterior and sunny front porch, where most guests kick back over beers. The cozy interior features a short copper-topped bar and a few tables. Taster trays of the house beers are served in ski boot-shaped sampling glasses attached to a short ski, with real working bindings. 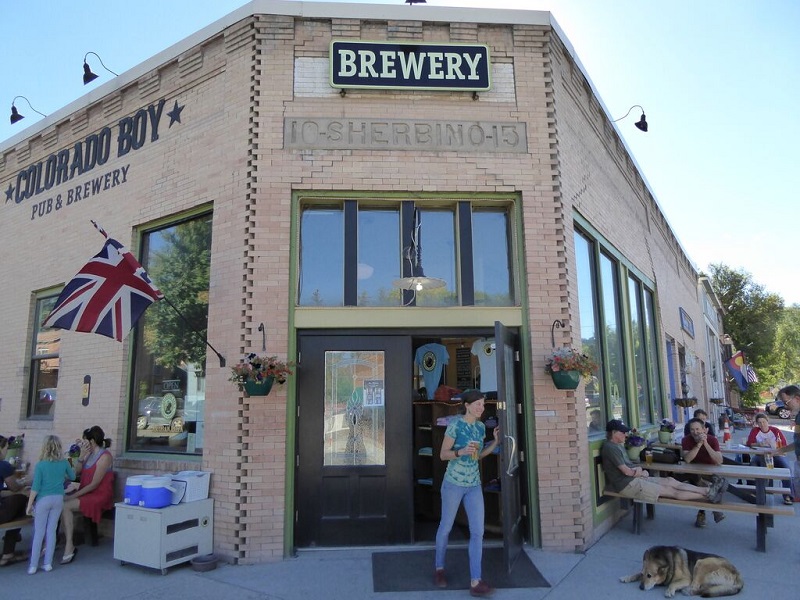 Use extra caution on the narrow windy road that descends 11,018-feet Red Mountain Pass between Silverton and Ouray (pronounced You-ray). From Ouray, it’s an easy 10-mile drive to Ridgway, home of Colorado Boy Pub & Brewery (602 Clinton St.), named after a mine that once operated in the area. The small interior space of the old wedge-shaped building is as agreeable as the well-crafted sessionable ales and first-rate pizza that attract a steady stream of locals and travelers.

A gorgeous 50-minute drive through rolling mountain-backed ranchland brings you to Telluride Brewing (156 Society Dr.), located in a small development of mixed businesses a few miles west of Telluride. The brewery has no formal tasting room. You enter directly into the brewhouse where there’s a small bar, but no seating (ask your server about that). This hardly fazes the crowds who show up to schmooze and enjoy pours of the dozen or so big-flavored house beers such as Face Down Brown, a Great American Beer Festival and World Beer Cup gold medal winner. 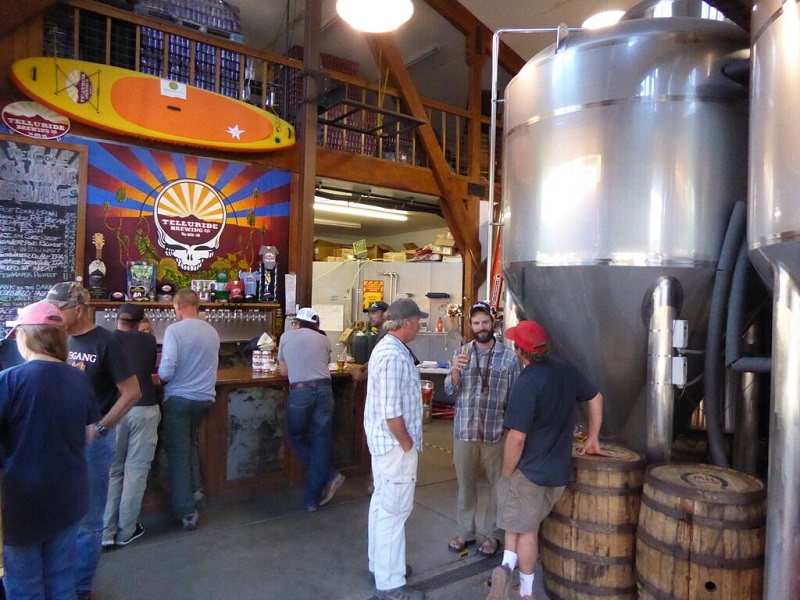 On the way to Smuggler’s Brewpub (225 S. Pine St.), your final Beer Weekend destination, pause to take in the storybook setting of this lovingly-restored Victorian town. The busy downtown brewpub occupies a rustic building once used to weigh minerals mined in the surrounding mountains. Grab a pint to fit your mood—the house beers are diverse and well-made—and kick back for a leisurely session on the sun-splashed patio at 8,750 feet. You’ve earned it.

Dan Rabin is a Boulder-based beer and travel writer and author of the guidebook Colorado Breweries.