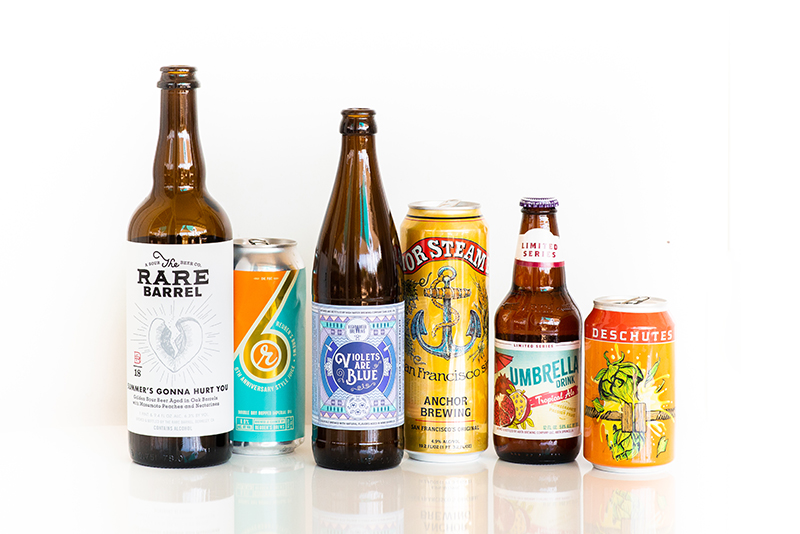 Did you know we’re on the tail end of Drink Steam Week? While there are plenty of events in San Francisco and beyond, you don’t need to be in the city by the bay to celebrate. This is the fourth year that the city of San Francisco has recognized the week, however it marks the first time that you can enjoy the revolutionary Anchor Steam beer in cans–big, 19.2-ounce cans, in fact. If it’s been a while since you’ve had one, you’ll be happy to know that the beer in those cans tastes just as you’re accustomed to finding it from the brewery’s distinctive bottles: with a smooth, lightly toasted malt character, woodsy hops and a flourish of crisp apple on the finish.

Given the name and the pomegranate and passion fruit on the label, you might expect Abita’s new “tropical ale” to be little more than a sweet, simplistic fruit beer, something aimed at cocktail drinkers. The fruit used is indeed very present: pomegranate comes through on the nose, a perfume of peach following it. And it’s fruit-forward on the palate, not just with pomegranate and passion fruit but with a bit of melon rind as well.

All of that fruit and sweetness, though, is well balanced the hops; Ekuanot and Centennial add bitterness as well as fruit notes of their own, with big citrus and pine and a medium body thanks to the oats. The beer should no doubt appeal to fruit beer lovers, but fans of IPAs will find much to appreciate as well. The beer captures that tropical feeling, landing somewhere in between the fruity wheat beers of the past and the fruited IPAs of today.

Part of High Water’s CAlambic (California lambic) series, Violets Are Blue is brewed with violet flowers, boysenberries and orris root (the root of an iris flower) and spent a full year maturing in oak barrels. The beer pours a beautiful plum-colored pour, with a big sour tartness and boysenberries noticeable on the nose. The sourness is assertive but not harsh, balanced by a floral quality from the violet and orris root (I have to confess this is the first time I’ve had a beer brewed with that ingredient). The floral sweetness keeps things from being too acidic, and toasted oak comes through on the finish. The sourness lingers, beckoning another sip.

A blend of barrel-aged golden sours aged with nectarines and Masumoto peaches, The Rare Barrel will release bottles of Summer’s Gonna Hurt You at its taproom tomorrow (Saturday, Aug. 18). The beer pours bright and light gold, with a highly active yet fleeting head. The aroma offers up a sharp, lactic tartness, with a glimmer of peach. That sharpness on the nose belies what is actually a really refined, moderate sourness, mellowed by fruit and time. In addition to the peaches and nectarines, there are notes of unripe strawberry and even a light cream on the finish.

A new offering in the “Fresh Family” of beers inspired by the brewery’s Fresh Squeezed IPA, Fresh Haze is, as you might expect, billed as a hazy IPA. In truth, the beer pours with more of a caramel color than most New-England-style IPAs. There’s grapefruit and pine on the nose, but the palate is papaya and candied peach. Despite the amber-ish pour, the sweetness comes across as hop driven, and not from caramel malts. The beer doesn’t scream hazy IPA, but it is indeed a fresh, fruit-forward IPA worth trying.

Released earlier this month to celebrate the sixth anniversary of Reuben’s Brews, this IPA was dry-hopped with Citra, Mosaic, Galaxy and Vic Secret to create a beer that the brewery described as its “juiciest IPA yet.” The nose, indeed, is super juicy; the kind of IPA that fills the room the second you crack the can. There is fresh orange and grapefruit, but also something like bubble gum in the nose–not the archetypal, classic bubble gum you might expect in a hefeweizen, but something more along the lines of Juicy Fruit. There’s an abundance of pineapple on the palate. Despite the beer’s big, juicy character, there is also a decent bitterness and a relatively dry finish.