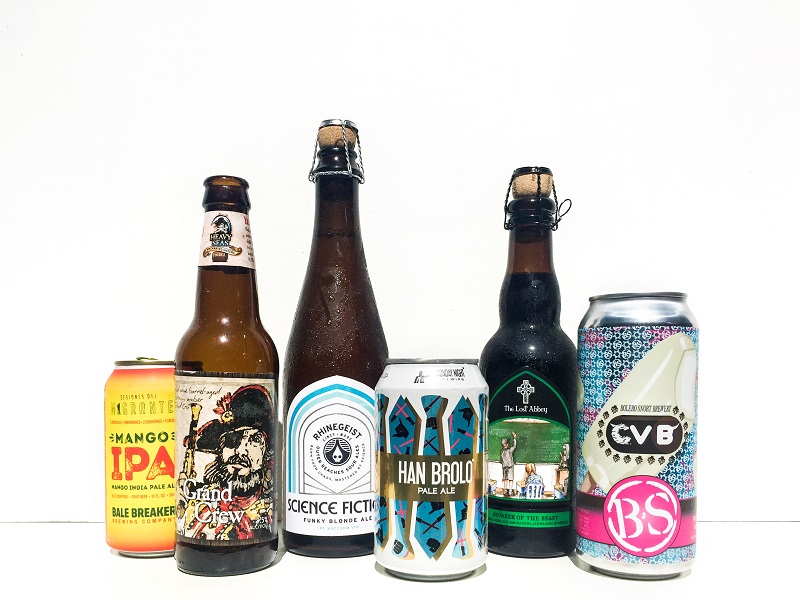 A year-round beer for Atlanta’s Monday Night Brewing, Han Brolo is brewed with Simcoe, Mosaic and Mandarina Bavaria hops, as well as lactose sugar. That trio of hops contributes a range of flavors, from fresh-cut grass and chives to orange peel and tangerine. It’s juicy without going overboard, with a little dankness to keep things interesting. Han Brolo’s finest feature, however, is its mouthfeel. Despite the beer’s 4.7% ABV, it boasts the body and creaminess of a bigger beer–quite likely due in part to the lactose. A thin, watery body is the Achilles’ heel of many a session IPA, but not this one. It feels sessionable, yet substantial.

YCH Hops contributed Citra, Ekuanot and HBC 630 hops, and the IPA was fermented with mango puree. Twenty pounds per barrel, in fact. Despite this, the mango comes through rather subtly, helping to round out hop-driven notes of grapefruit, pineapple and green-onion dankness. So often fruited beers–even IPAs, backed by copious amounts of hops–come across as overly sweet. Here it’s an underlying sweetness, allowing the hops to shine.

A portion of the proceeds from the new Mango IPA will benefit La Casa Hogar, a nonprofit that “connects and educates Latina families, to transform lives and our Yakima Valley.”

The latest variant in Bolero Snort’s “vanilla bullsicle” series of IPAs gets the coconut treatment. Coconut Vanilla Bullsicle, or CVB for short, boasts a huge coconut aroma that calls to mind an Almond Joy, sans chocolate. Vanilla is there too, but it’s far more subtle. Despite that blast of coconut on the nose, the beer isn’t overly sweet–the hops (Wakatu and Denali) contribute restrained bitterness and provide enough pineapple and citrus to balance those dessert flavors. After drinking it, we’re left thinking this beer just shouldn’t work this well–yet it does.

The late Fred Eckhardt, dean of American beer writing, once compelled his readers to “Listen to your beer! Now!” His point was that beer can and should be appreciated through all five senses, and indeed the first sensory sensation that Rhinegeist’s Science Fiction provides is an audible fizzing inside the bottle as soon as the cork is pulled, like soft static on an old radio. The fourth in the brewery’s Outer Reaches series of sours, Science Fiction is indeed highly carbonated, yielding a crackling head that is not long for this world. Perhaps in this case, we taste first not with our eyes, but our ears.

Once that head subsides, the nose offers a pleasant aroma of Brettanomyces funk and dill. The beer’s sourness is not only assertive, but complex: in addition to sharp, lactic notes, there’s a red wine vinegar quality as well. It’s a bright beer both in color and character, with green apple and lemon rising above that sourness and a glimmer of oak.

Aged eight months in Pinot Noir barrels, Grand Crew is the latest in Heavy Seas Beer’s Uncharted Waters series. Clove and toasted bread come through most prominently on the nose, while the barrel character–in the form of tart cherry jam–comes through more on the palate. Six different Belgian malts add a distinct earthy and nutty quality, while the Belgian yeast adds a dash of peppercorn and the aforementioned clove. A fine sipper on its own, but would also shine alongside savory dishes (try barbecue, red chili or oven-roasted vegetables).

Brewed with raisins, cinnamon and dried chile peppers, The Lost Abbey describes Number of the Beast as “reminiscent of an oatmeal raisin cookie.” The first impression, though, is of the overwhelming scent of bourbon. The raisins and an impression of fig follow, with a little soy in the nose. More sweetness on the first sip, with caramel and subtle vanilla–the cinnamon is tougher to pick up on. The beer has a fair share of heat from the alcohol, but at 14% that’s pretty much expected. This one would be an interesting candidate to set aside for a year or more to see how all of these flavors develop. Despite its heft and heat, the beer drinks easily. Moderate carbonation keeps the beer lively and allows it to dance across the palate.

Six to Seek celebrates the best beers we’ve tasted this week. Check out our best beers of weeks past here.