When Belgium Came to Cooperstown 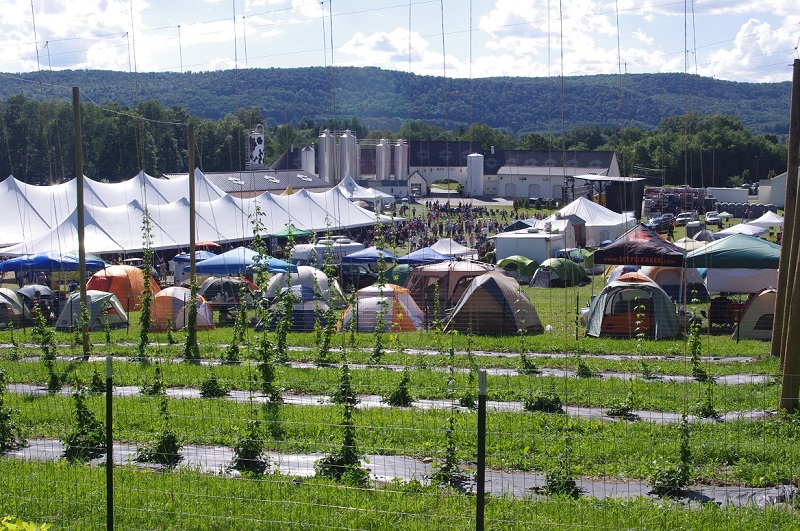 An early Belgium Comes To Cooperstown Festival on the grounds of Brewery Ommegang. (Photo by Bryan J. Kolesar at TheBrewLounge.com)

In the fall of 1997, a new brewery opened amid 136 acres of an old hop farm in Cooperstown, New York. Brewery Ommegang was named after the medieval pageants held in what is now Belgium.

The animating force behind the new brewery was a husband-and-wife team, Donald Feinberg and Wendy Littlefield, who had long run the import company Vanberg & DeWulf, which specialized in bringing Belgian brands such as Affligem, Duvel, Frank Boon and (especially) Saison Dupont to the U.S.

The launch of Ommegang in 1997—it’s first day of brewing was October 17, following six months of construction—seemed a natural progression for the duo.

It wasn’t just the couple’s own interest in Belgian beer, which dated back to 1979, when the recently minted Yale graduates eloped and moved to Belgium. Nor was it their partners on the venture, which included the three Moortgat brothers that then owned Duvel maker Duvel Moortgat (as well as their uncle), Affligem’s managing director, and a pair of cousins that owned Belgium’s Dubuisson Brewery.

It was that Belgian beer was having a moment in America in the mid-1990s.

The moment started, actually, on August 23, 1990. That was the Thursday when the Discovery Channel, which beamed into roughly 37 million American households then, broadcast “The Burgundies of Belgium” episode in the critic Michael Jackson’s Beer Hunter series. The primetime episode likely gave Belgian beer its widest consumer audience ever in the United States.

The following year, Jackson’s Great Beers of Belgium debuted. Donald Feinberg and Wendy Littlefield’s Vanberg & DeWulf would publish it in the States in 1995, in fact, and, like with Jackson’s World Guide to Beer 14 years before, Great Beers made it into some influential and impressionable hands.

Also in 1991, a then-married couple, Kim Jordan and Jeff Lebesch, started what they called the New Belgium Brewing Co. out of their basement in Fort Collins, Colorado. It was just what its name implied: a brewery producing beers in the Belgian tradition, rather than the German, Czech and English ones that dominated the U.S. marketplace.

So novel was New Belgium’s approach that it literally defied categorization at the Great American Beer Festival in 1992, failing to fall into any of the designated styles for judging. In 1993, the GABF would add a “Mixed, Specialty” category—and New Belgium’s Abbey Ale, inspired by Belgian dubbel, won gold.

Ommegang’s 1997 launch could be seen as a tipping point, then, for Belgian beer in the U.S.: Two breweries now, both on their way to becoming two of the larger microbreweries in the country, and the evangelization efforts of Michael Jackson. (It didn’t hurt, either, that a clutch of Belgian restaurants had recently opened in America’s financial, cultural and media capital— “Suddenly, tiny nation is a New York trendsetter,” went the headline on a New York Times article in March 1999.)

There was also one other factor driving Belgian beer’s mid-1990s moment, and that was the import work of companies such as Vanberg & DeWulf  (the portfolio of which Total Beverage Solution acquired in 2014) and Merchant du Vin, which Charles Finkel started in Seattle way back in 1978.

The Belgian brands these companies marketed stood out at a time when the likes of lambics and saisons were the playthings of well-traveled aficionados—or at least the sorts who knew of Michael Jackson the critic as well as Michael Jackson the pop star.

And, as for Ommegang now, Duvel Moortgat is the sole owner. Also, as for why Cooperstown, Wendy Littlefield bought her husband a Yankee fantasy camp experience at the site of the Baseball Hall of Fame. The couple fell in love with the town, and made it the home of their brewery 20 years ago.

Tom Acitelli is the author of The Audacity of Hops: The History of America’s Craft Beer Revolution, now in its second edition, and Whiskey Business: How Small-Batch Distillers Are Transforming American Spirits.