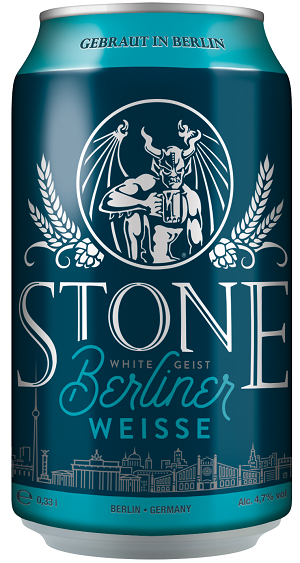 ESCONDIDO, Calif.—Just two short years after the history-making opening of Stone Brewing – Berlin, the brewery’s beers are now distributed to 25 European countries, making Stone one of the most widely distributed and sought after breweries in Germany. Not content to rest on the hoppy laurels of the company’s world-renowned reputation for American IPAs, the latest in the brewery’s year-round selection is the Stone White Geist Berliner Weisse. Brewed true to the style’s namesake origin of Berlin, the tart and refreshing beer is now enjoying a special limited availability in the US.

For the history buffs: The Berliner Weisse is a style dating back to at least the 16th century, and to this day, European appellation labeling standards require that a beer must be brewed within the city of Berlin to call the beer a “Berliner Weisse.” A complex sour beer, the style was once honored by Napoleon as the “Champagne of the North.” It’s now enjoying a resurgence by small brewers in the US and elsewhere in the world, many of whom are creating amazing variations with fruit and other creative additives. As Stone deepens its roots in the city of Berlin, it seems only fitting that the team would take an interest in exploring the style in its purest and most authentic form.

“As global participants in the craft beer community, Stone has the unique opportunity to share beers across locations, highlighting the different local and regional influences along the way,” stated Greg Koch, Stone Brewing executive chairman & co-founder. “Stone White Geist Berliner Weisse features the work of our talented team at Stone Berlin, and we’re truly honored to be among Berlin’s craft brewers taking charge as the revivalists to help return this style to its former glory.”

The new release gains its orthodox lightly sour and acidic character from a specially selected historic Lactobacillus strain sourced from Berlin’s cultures. To ensure a properly Stone – and therefore iconoclastic – Berliner Weisse, the ABV is a bit stronger than is typical for the style yet still a modest – by American craft brewing standards – 4.7% ABV. Hopped with newer German varieties Calista and Hüll Melon, the aroma leads with lemon, peach and melon and the unexpectedly bold and pleasantly refreshing tart flavor punches above its ABV weight.

It’s important to note that Stone does not suggest (or even allow) the addition of flavored syrups to its Berliner Weisse, noting that the addition of these syrups only began in modern times and is not true to the authentic origin of the beer style.

Stone White Geist Berliner Weisse will debut in the US beginning this week throughout California with a broad national launch in the fall. It will be imported in 0.33l six-pack cans and can be found using Stone’s Beer Finder: find.stonebrewing.com. The beer is also available on draft at the source: Stone Brewing World Bistro & Gardens – Berlin.