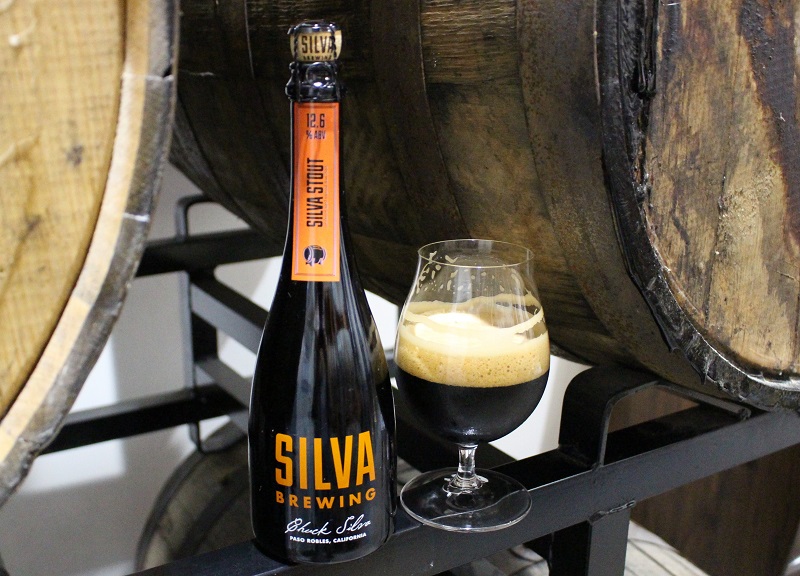 PASO ROBLES, Calif.–With trademark in-hand, Silva Brewing owners, Chuck and MJ Silva, set out to write the next chapter in the highly acclaimed saga of the award-winning barrel-aged imperial stout, Silva Stout™. Chuck originally brewed and bottled the beer in 2010 while brewmaster at San Diego’s Green Flash Brewing. The beer was a Top-Rated beer after its initial bottle release in 2010 and remained on numerous top 100 lists for years while also earning a prestigious silver medal in the Wood- and Barrel-aged Strong Beer category at the 2012 edition of the Great American Beer Festival.

“When MJ and I left San Diego to start our own brewery, we felt we had a duty to keep Silva Stout™ alive and, in doing so, replicate the glory of those original, award-winning batches,” says co-founder and brewmaster Chuck Silva, who tips his hat to Green Flash for handing him the trademark when he set off for Paso Robles. “I’m giving Silva Stout™ a rebirth with a new imperial-stout base recipe that adds depth and fullness to the beer’s body and overall character. A variety of different spirit barrels are being used to age the stout for extended periods to get the full flavor each barrel has to offer and allow for unique small-batch releases.”

The new imperial stout siphoned into those barrels goes by the name Ouroboros (the Greek symbol of rebirth). The first release will consist of stout aged for 14 months in rye whiskey barrels. Maturation in rye barrels lends boozy notes along with nuances of molasses and oak that mesh with the base-stout’s inherent dark chocolate and roasted cacao flavors. Additional notes of plum, dates and prunes come courtesy of the barrel-aging process while a hint of cola nudges its way in care of exotic sugars added to the boil kettle. The contents of two rye whiskey barrels were blended together for this release, with a touch of fresh stout added back to tame the booziness and finesse the concentrated beer.

“The anticipation has been building over the past year for all of us as we’ve watched the stout ooze out of the cracks in the barrels, creating what looks like strands of stout candy,” says co-founder and head of operations MJ. “I’m happy to say the time has come for us to stop talking about how Silva Stout™ is going to turn out. Now that we’ve gone through the expert blending and bottling, it’s finally ready to share with everyone!”

Cork-finished 510-milliliter Italian-sourced Tosca bottles of Silva Stout™ will be available for purchase at the Silva Brewing tasting room, located at 525 Pine St, Suite B, Paso Robles, starting Friday, June 1, 2018, with samples available on-draft while supplies of this highly-anticipated and limited release last. Future releases of Silva Stout™ will explore the beer aged in different types of barrels and remain small-batch in nature.

ABOUT SILVA BREWING: In 2015, husband-and-wife team, Chuck and Mary Jo Silva moved to Paso Robles, California, to open their passion project, Silva Brewing. It was a homecoming for Chuck, who was born and raised on the Central Coast before relocating to San Diego and subsequently making a name as one of the region’s—and the country’s—foremost brewing innovators. After amassing numerous awards on a regional, national and global scale as the Brewmaster for one of the nation’s top 50 craft breweries located in San Diego, he decided to downsize for the purpose of chasing his muse on a personal, much smaller scale back home. Silva Brewing is equipped with a 10-barrel direct-fire brewhouse manufactured by Premier Stainless Systems, 100-barrels’ worth of cellar capacity, and a tasting room outfitted with 11 taps serving beer for consumption on-site and to-go, Wednesday through Sunday. The company’s annual production capacity is 1,200 barrels, and its beers are distributed to distinguished hospitality venues throughout the Central Coast and South all the way to San Diego. For more information on Silva Brewing, consult the company’s website—silvabrewing.com—or follow Chuck and MJ on Facebook, Twitter or Instagram (@SilvaBrewing).