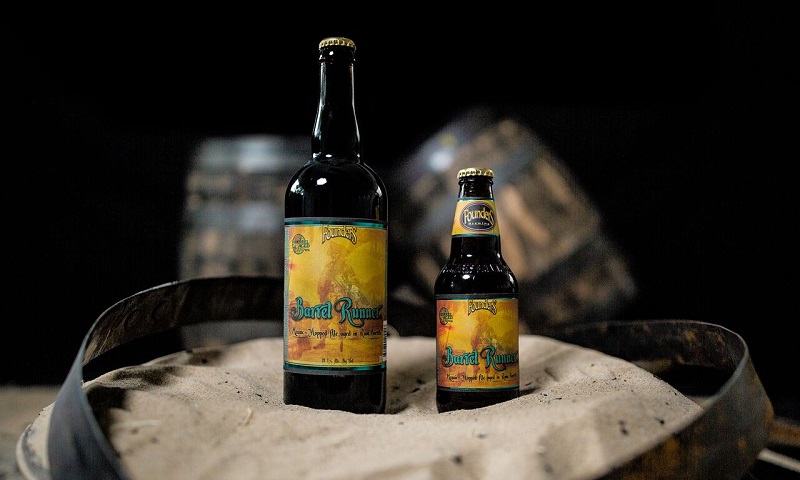 GRAND RAPIDS, Mich.–Founders Brewing Co. announced today that they will release Barrel Runner as the fourth installment in the 2018 Barrel-Aged Series. Barrel Runner, a mosaic-hopped ale aged in rum barrel-aged is preceded by Dankwood, Backwoods Bastard and KBS in the series. This is the first time the brewery has released a rum barrel-aged beer in package.

“I drink tiki cocktails probably more than I should and looked to them for inspiration when creating Barrel Runer,” said Brewmaster Jeremy Kosmicki. “You get a lot of bright, tropical character from the abundance of Mosaic hops plus a nice kick of oak and rum from the barrels. Add a tiny umbrella and you got yourself a beer perfect for enjoying poolside.”

Inspiration for barrel-aged beers can come from the most unexpected places and Barrel Runner is proof of that. Sweet and hoppy, rich and bright – this rum barrel-aged imperial IPA brewed with Mosaic hops will make you believe you’re in the tropics. 11.1% ABV, Barrel Runner will be available in 4-packs of 12 oz bottles and 750mL bottles beginning in June through August. It will have an SRP of $14.99/4-pack and $11.99/750mL bottle. Fans will be able to find Barrel Runner in both Grand Rapids and Detroit taproom locations beginning on June 22, 2018.

About Founders Brewing Co.
Established in 1997 by two craft beer enthusiasts—Dave Engbers and Mike Stevens—with day jobs and a dream, Founders Brewing Co. brews complex, in-your-face ales, with huge aromatics and tons of flavor. Founders ranks among the top 10 largest craft breweries in the U.S. and is one of the fastest growing. The brewery has received numerous awards from the World Beer Cup and the Great American Beer Festival and RateBeer and BeerAdvocate users often rate its beers among the best in the world. Located in downtown Grand Rapids, Michigan, Founders is a proud member of the Michigan Brewers Guild. For more information, visit foundersbrewing.com or follow Founders on Twitter, Facebook,Instagram and YouTube.

About the Barrel-Aged Series
Crafting legendary barrel-aged beers is an exercise in patience. We start by brewing complex, world-class beer worthy of time in a barrel. Then, our experience and years spent mastering our craft means we know exactly when it’s been aged to perfection. After one sip, you’ll know – it was worth the wait.