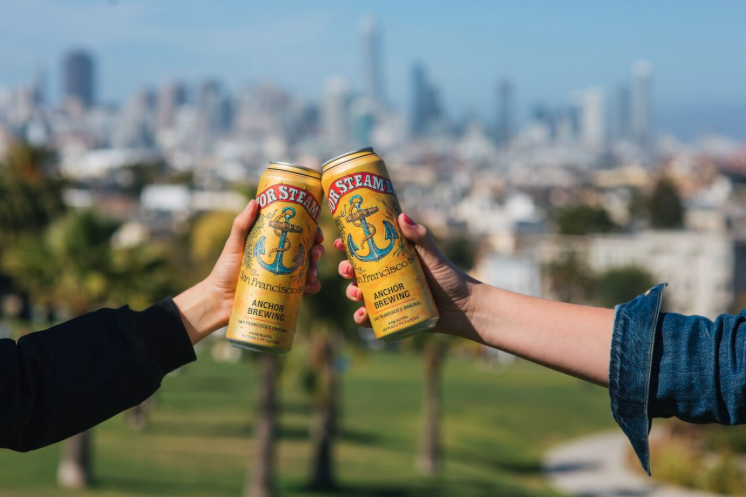 In 1965, Fritz Maytag acquired and revived the struggling Anchor Brewery.  Anchor Steam (4.9% ABV) was the first handcrafted beer to be revitalized in America after Prohibition starting a revolution in beer that originated today’s craft beer movement.  In 1971, Fritz Maytag began bottling Anchor Steam Beer—the first bottled Anchor Steam in modern times.  The distinctly flavored San Francisco original has been classically handcrafted in Anchor’s copper brewhouse for 122 years and counting.  Neither fully a lager nor fully an ale, Anchor Steam is in a category of its own, created by fermenting a lager yeast at warmer ale temperatures.

“No matter how many new beers we create, we never stop celebrating our flagship brew,” said Anchor Brewmaster Scott Ungermann.  “Anchor Steam is one of a kind, with a unique, rich flavor and unparalleled history.  Whether you’re exploring the great outdoors or embarking on an urban adventure, now Anchor Steam can easily go with you to even more places.  We hope Anchor fans will enjoy the look and feel of our new 19.2oz cans, which puts a modern twist on the classic Anchor Steam design.”

Anchor Steam Beer derives its unusual name from the 19th century when “steam” was a nickname for beer brewed on the West Coast of America under primitive conditions and without ice.  While the origin of the name remains shrouded in mystery, it likely relates to the original practice of fermenting the beer on San Francisco’s rooftops in a cool climate.  In lieu of ice, the foggy night air naturally cooled the fermenting beer, creating steam off the warm open pans.  Today, Anchor Brewing is the only American brewery that still employs open fermentation on a commercial scale.  Although Anchor has modern equipment and their fermenters are made of stainless steel—and not on rooftops—Anchor has kept this process as part of the brewing heritage for Anchor Steam as well as other beers.

Anchor Steam owes its bright copper color, frosty tan head, and rich, distinctive flavor to this unique, historic brewing process.  It is a process that combines deep respect for brewing tradition with many decades of evolution to arrive at a unique approach: a blend of pale and caramel malts, fermentation with lager yeast at warmer ale temperatures in shallow open-air fermenters, and gentle carbonation in Anchor’s cellars through an all-natural process called kräusening.

With flavors of mild toasted malt and a touch of caramel, Anchor Steam is balanced by bright, piney hoppiness.  It has aromas of toasted bread crust maltiness followed by bright evergreen Northern Brewer hops and floral esters.  A smooth and velvety mouthfeel is accompanied by lively bubbles from the natural kräusening process and a crisp, bright hop finish.  It pairs well with any seafood dish, steak with caramelized onions, and grilled portobello mushrooms.

Anchor Steam cans are available in a convenient single size or easy to grab 4-pack nationwide.  Find a beer near you using the Anchor Beer Finder.

Anchor Brewing Company’s roots date back to the California Gold Rush making it one of America’s oldest breweries. Its Anchor Steam® Beer is San Francisco’s original since 1896. In 1965, Fritz Maytag acquired and revived the struggling brewery at a time when mass production of beer dominated and seemed unstoppable. Maytag started a revolution in beer that originated today’s craft beer movement. An undisputed icon, Anchor is America’s first craft brewery where beers are handmade in our traditional copper brewhouse from an all-malt mash. At Anchor, we practice the time-honored art of classical brewing, employing state-of-the-art methods to ensure that our beers are always pure and fresh. We know of no brewery in the world that matches our efforts to combine traditional, natural brewing with such carefully applied, modern methods of sanitation, finishing, packaging and transporting. To learn more visit www.anchorbrewing.com.