The Man Who Invented Nitro 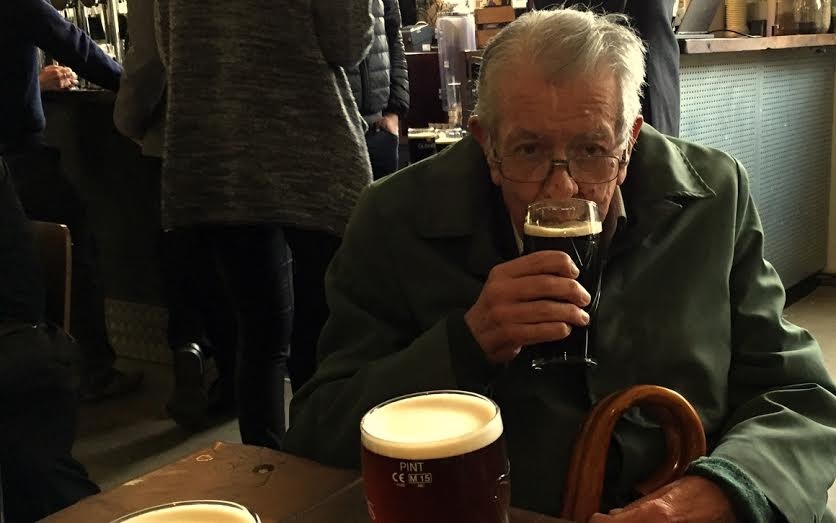 [Full Disclosure. The following post came as a result of a visit I made to Dublin to the Guinness brewery. The folks at Diageo, Guinness’ parent company, paid for the trip and put me up while I was in Dublin. Guinness is also a sponsor of my personal blog, Beervana.]

If you walk into any decent pub or brewpub, you’ll almost certainly encounter one beer served “on nitro.” It has long been a standard system for stouts and some pale, creamy ales, but lately breweries have been pushing it out to other styles as well, notably (and unsurprisingly) IPAs. When used to “carbonate” beer, nitrogen creates a silky texture and produces a dense, mousse-like head. Unlike regular carbon dioxide bubbles, which continue to absorb more CO2 as they float to the surface and become larger and more buoyant, nitrogen doesn’t dissolve as well, and so the bubbles remain tiny. And those tiny bubbles are responsible for that creaminess. 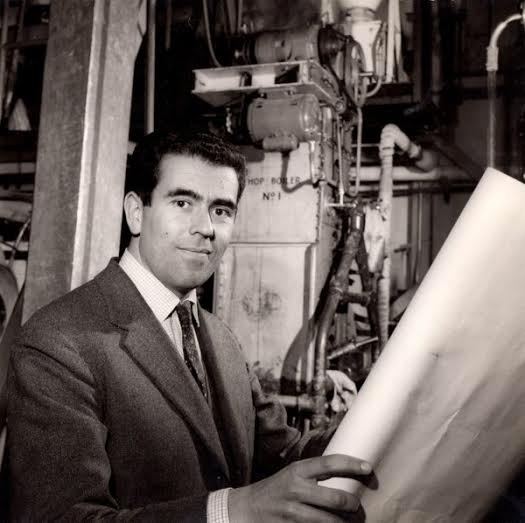 Although nitrogen is a natural gas—it’s a major constituent of the air we breathe—it does not appear naturally in beer, like carbon dioxide. It had to be invented rather than discovered. The man who did so was a mathematician named Michael Ash, who had been hired by Guinness in 1951. I had the very good fortune of meeting Mr. Ash a couple months ago when he was honored by Guinness for his contributions to the brewery. I was saddened to learn that he died on April 30, just six weeks later. His story has not been broadly shared, but it’s pretty remarkable—and not just because he invented nitro.

Ash was born in Calcutta in 1927, and went on to Trinity College, Cambridge, where he was awarded a “triple first” in his studies and was the top scholar at Cambridge. After graduation, he taught mathematics at Bedford College for three years before joining Guinness. He came in with a cohort of other smart people who didn’t have a background in brewing; this was part of a new initiative at Guinness to encourage innovation. Of course, Ash was the first hire they made.

Guinness brought me to Dublin to participate in an event honoring Mr. Ash. I was joined by London writer Pete Brown and local Dubliner John Duffy. When we sat down to interview Ash, he explained what it was like going to work for the brewery. “It was a semi-academic atmosphere, you see,” he said. “They brought in all these science graduates, they all came from the same universities, so in a way it was like an academic atmosphere itself. It was different, you’re quite right.” The new arrivals were sent to St. James Gate to learn each aspect of the brewing process. “To get trained, you had to do every manual job in the place. That took a year and a half. So this was at age 21; I had to get my hands dirty.”

Once he’d been trained as a brewer, he returned to the Park Royal Brewery in London. He was appointed head of the Sample Room, where he led a team of 20 charged with improving the shelf life of bottled Guinness. Ash himself was privately interested in a different challenge, however. Most Guinness outside Ireland was sold in the bottle, but the Irish drank it from a convoluted dispensing system. Figuring out how to streamline the process was a difficult enough conundrum (they called it the “draft problem”), that even after 20 years no one had solved it.

To give you a sense of what they were trying to replace, here’s how Martyn Cornell describes Irish Guinness in Amber, Gold, and Black:

Ash recalled this himself. “The barman would take a whole minute to fill one glass. He had to get a low pressure cask over a period of time and then the high pressure one, and he had to mix them. He had to be very skilled, the Irish publican, because it took a minute to get a glass. Every barman had his own process. It was all very amusing.”

Hear Ash describe the process himself in this audio clip:

He worked on the riddle of how to replace this system for years. Very early on, he saw nitrogen as the solution. It was “such an obvious gas,” he said. “It’s completely inert and it’s three-quarters of what we breathe. It was perfect for this purpose.” The trick wasn’t selecting the right gas, though; it was designing a keg that would work with it. Inside Guinness, Ash’s quest was regarded as quixotic, and other brewers chided it as “daft Guinness” and the “Ash Can.”

Eventually, working with a keg designer, he did figure it out. He described it to us. “There were two parts. One part where we had to have a reducing valve, and one part for the two gases, nitrogen and CO2, high pressure, reducing valve, low pressure, flood the beer. When we drew off the beer, the gas would come through the reducing valve giving you a constant pressure.” The keg went through two designs before Guinness started sending it out to pubs, rushing at the end to get the project launched by 1959—the brewery’s 200th anniversary.

It’s safe to say that Ash’s invention revolutionized Guinness and Irish stout. It’s hard to imagine Irish stout served any other way, now (and not just Guinness), and so much of what nitro brings to the drinking experience has become fused with the brewery’s identity. The “surge,” that period of settling when the bubbles seem to flow down as the head settles, has been the subject of ad campaigns for decades. Pouring a perfect pint, topped with the precise depth of snowy head, is an activity the brewery treats almost like a sacrament.

And yet, it’s also true that nitrogen had a huge effect on the flavor and experience. Nitrogen scrubs flavor and aroma (or perhaps it’s safer to say nitro inhibits its expression) and a sizable number of drinkers hated it. Even today, it has a mixed reputation, and you hear grumbling about how nitro “ruined Guinness.” This is not surprising given that the old system was not just a way of dispensing a beer, but combining batches of different vintages. No doubt it did taste very different. There are, of course, millions of people who would vehemently argue the point. But whichever camp you inhabit, it’s hard to argue what a huge force it has been.

On an entirely separate note, it was fascinating to meet Mr. Ash. Although Guinness trained him as a brewer, he was unlike any brewer I’ve ever met. Brewers typically have a scientific bent, but they also have a personal connection to the liquid they bring to life. Ash had the mind of a pure scientist. A typical brewer would have described nitrogen in the context of the way the beer tasted, felt on the mouth, and facilitated pub-going. For Ash it was a solely intellectual riddle. Guinness fiddled at the margins with the “draft problem” from 1932 until Ash got there, and then he set about solving it the way a mathematician would solve any problem.

Show me a brewer and I’ll show you a romantic. But Ash, back at the brewery for the first time in decades, didn’t get a tear in his eye for the old days. Instead, talking about his starring role in this drama seemed to spark anew that curiosity for discovery. He was energized by talking about how he’d solved the problem.

The Guinness of that era was a very different company. Bringing in non-brewers precisely so they would arrive at new solutions to old problems was a radical move. It undermined conventional wisdom—and the people who were committed to the status quo. Guinness decided to follow Ash’s lead and allowed its product to become transformed by a new dispensing system. It was the kind of move modern, risk-averse corporations (like Diageo, Guinness’ parent company) don’t make—and perhaps rightly so. Fundamentally changing a product can destroy a company. Yet there was a time when they were willing to do it, and that posture changed the trajectory of one part of brewing.

In any case, the next time you have a pint of beer on nitro, raise it to Michael Ash. You wouldn’t be drinking it without him.