Look at What IPAs Have Wrought in the Hop Fields 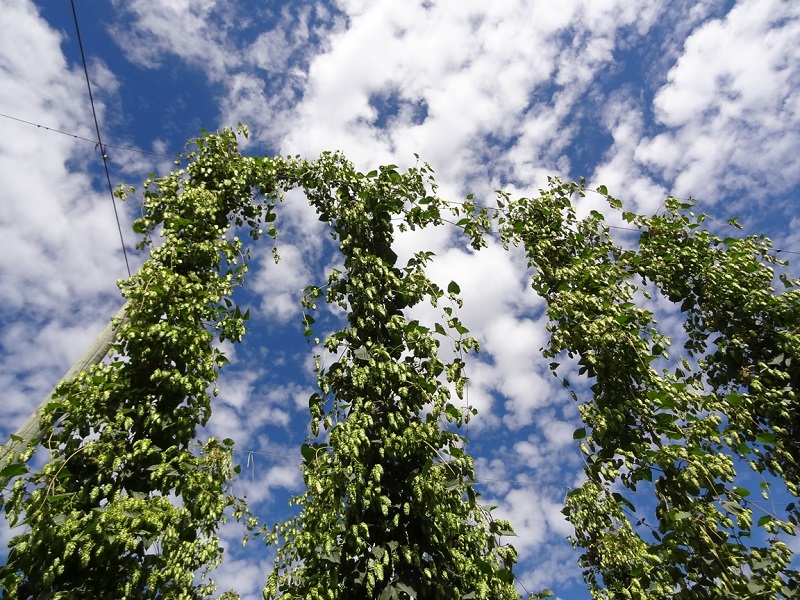 We may think IPAs have been a big deal for a long time in American brewing, but they didn’t even become the best-selling style in the craft segment until five years ago. That was about the time when breweries started tinkering with the way they make these beers, using more and more hops later and later in the brewing process. Now, many of the familiar styles we love use, by historical standards, crazy amounts of hops. And you know whom that pleases? Hop farmers. Here’s the latest report from the Hop Growers of America:

Some amazing things are happening in the hop fields. It’s not just that Americans are growing more hops, it’s the types of hops they’re growing. Ten years ago, over three-quarters of all the hops grown in the U.S. were just four varieties: Zeus (21 percent), Willamette (21 percent), Columbus/Tomahawk (18 percent) and Galena (17 percent). Three of those are “high-alpha” (high bitterness potential) strains, which big breweries use to reduce costs. Since most mass market beer has an almost imperceptible amount of hops, it doesn’t matter which varieties breweries use. So they use the varieties that give the biggest bang for the buck, which keeps costs as low as possible for the brewery. It is, of course, not great for hop growers.

But the growth in IPAs has changed everything. Even though they were using tiny amounts of hops per barrel, the volume of mass market lagers made them the largest hop buyer until recently. But now smaller breweries making hoppy ales have become such a huge buyer of hops that growers are catering to their needs. Diversity is the trend. The four top hop varieties now constitute just 40 percent of the total—and the top 10 varieties only make up 66 percent of the total. The most popular hops now? Cascade (14 percent), Centennial (9 percent), Columbus/Tomahawk/Zeus (8 percent), Citra (8 percent), Simcoe (8 percent), Mosaic (5 percent), Chinook (4 percent), and Simcoe, Nugget, and Willamette, all at 3 percent. Notice a trend? Over half of those are workhorses in hoppy ales.

To take it a step further, those hops categorized as “aroma” hops (meaning generally lower bitterness potential) now account for three-quarters of all hop acreage. There are just over 40,000 acres of aroma hops under cultivation—more than all the hops grown as recently as three years ago. Have a look: 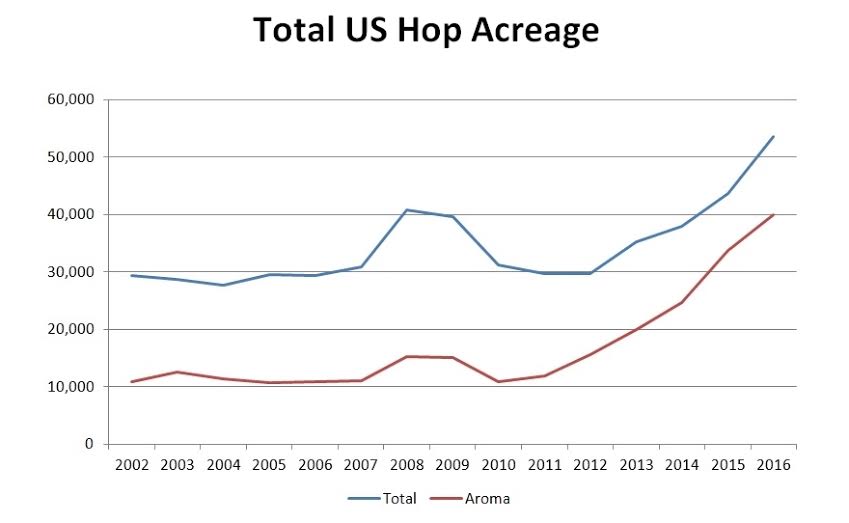 For hop growers, all of this looks very good. As recently as 12 years ago, they had just half as much acreage under cultivation. There appears to be no sign of slowdown in the popularity of these heavily-hopped American ales, and the newer IPA-friendly varieties are driving the market. Citra, El Dorado, Mosaic, Simcoe—and even venerable old Cascades are all growing massively in acreage.

Put it another way: every time you crack open a bottle of IPA, somewhere a hop farmer is smiling.