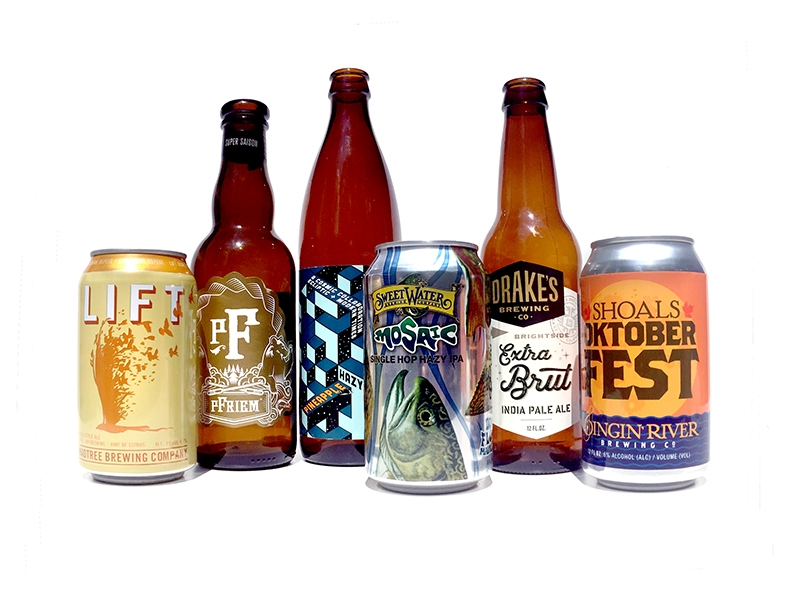 With a light, bready sweetness and crisp finish, MadTree’s Lift nails the refreshing character you want in a Kölsch. There’s soft lemon not out of keeping with the style, but also an orange peel note that suggests American hops are also used. A visit to the brewery’s website reveals that the beer is indeed hopped not just with the more traditional Hallertau Mittelfruh, but also Cascade and Pacifica. They are used sparingly, however, providing enough citrus to keep things interesting without overhopping an otherwise delicate beer. Lift is ideal for these last days of summer.

When I had Singin’ River’s Citracabra earlier this summer, I was surprised at how restrained the brewery’s kettle sour was–especially considering that beer’s label. No one-trick pony, it turns out Singin’ River is as adept at brewing a Marzen as it is a dry-hopped sour. Shoals Oktoberfest pours amber, with rich Munich malt on the nose. The lightest caramel complements the beer’s toasted maltiness, and a spicy, noble hop profile helps to balance the beer. The result is a beer that’s true to style, exceptionally drinkable and a great choice with or without food.

Often one of the more satisfying aspects of a saison is that big, pillowy head, and pFriem’s Super Saison doesn’t disappoint in that department. This highly carbonated farmhouse ale pours an impressive head that sticks around, giving off sourdough and light lemon on the nose. In addition to the Belgian yeast and a bit of clove, the beer has a gentle floral quality and tart fruit notes (specifically kiwi, with a little pear as well). It’s a Super Saison, indeed–it takes everything you want in that classic farmhouse profile, and then amplifies it.

After brewing several test batches of Brut IPA, Drake’s Brewing Co. is rolling out kegs and six-packs of its take on the emerging style throughout California. Like many brewers, Drake’s uses amylase enzymes to ferment additional sugars, leaving the beer with an extra dry finish. Brightside is hopped with Centennial, Simcoe, Hallertau Blanc and Hallertau Mandarina, and it’s those latter two that contribute white grape and lemon notes that are well suited to the style’s characteristic dryness. One of the most fun things about Brut IPAs is the way the overall hop profile of the beer changes when the beer is stripped of virtually all sweetness. Doing so doesn’t amplify the tropical, juicy notes, as has been the M.O. over the last few years, but instead changes the nature of the beer entirely.

The latest in SweetWater’s Catch and Release series of seasonal beers, this one is double-dry-hopped with a single hop variety–in this case, of course, it’s Mosaic. One of the most popular hops of the last few years, here it contributes zesty orange and sweet pineapple, though there is surprisingly a little dankness on the nose. There is a touch of wheatiness behind the hop character, and the beer has a refreshing quality thanks to a clean, quick finish that leaves you wanting more.

For its latest “Cosmic Collaboration,” Ecliptic Brewing Co. joined forces with Modern Times Beer, which recently opened a tasting room in Portland. The resulting Pineapple Hazy IPA is also the brewery’s first foray into 500-mL bottles, as “beer drinkers prefer bottles that are a true pint and easier to finish in one pour,” according to Alaric Lawrence, packaging manager at Ecliptic Brewing Co.

The new hazy IPA is brewed not just with fresh pineapple, but also with the Denali hop, which gives off a pineapple flavor of its own. Citra and Mosaic are also used, contributing bright, vibrant notes of nectarine and lemon zest. With a creamy body and an abundance of fruity notes from both the pineapple and the hops, this collaboration is one to seek out.