When I found out that the theme for this issue was “underground,” my only thought was: why wouldn’t I create a compendium of some of the finest underground breweries? And we’re not talking in the hipster sense of a brewery being off the radar and before it’s cool, but one that’s physically subterranean. Surprisingly, I wasn’t able to track down many breweries with these elements open to the public. Then again, who’d want to maneuver a brewhouse into a building’s basement? A few way-old-school breweries like Yuengling in Pottsville, Pennsylvania, immediately sprang to mind since “America’s oldest brewery,” brewing on its current spot since 1831, includes spelunking in its lagering caves built into its mountainside setting. But other than a nifty bonus to the tour, the caves are obsolete.

I thought about focusing on breweries near famous underground caves! But the truth is, there aren’t a lot of breweries located at the mouths of National Parks like Mammoth Caves in Kentucky or Carlsbad Caverns (although, Guadalupe Mountain Brewing in Carlsbad, New Mexico—which just opened this January—is less than a 20 mile drive from some of the most breathtaking caves in America). So who does offer spots that are equal parts cavern and tavern? Read on and watch your head.

In Portland, Oregon, where beer is decidedly mainstream, a few breweries are underground. Both Hopworks Urban Brewery (2944 S.E. Powell Blvd.) and Columbia River Brewing (1728 N.E. 40th Ave.) have their systems below their respective restaurants. But in order for Upright Brewing (240 N. Broadway) owner/brewer Alex Ganum to take his affinity for jazz to a higher level by improvising dozens of rare beers, he has to brew them in the basement of the Leftbank Building centrally located in Portland’s Rose Quarter. It’s also underground in the sense there’s nary a sign outside the building, but visitors who walk in and see a coffee shop can simply take the elevator down a floor.

The below-level tasting room is in the same space as the brewery with open fermentation tanks. Although Belgian farmhouse styles launched Upright in 2009, they brew a range of English, German, and international styles now. Stacked barrels aren’t mere decoration, but always have something intriguing maturing inside such as the pair of kriek-style beers. Inspired by Charles Mingus’s “Hearts’ Beat And Shades In Physical Embraces,” Hearts’ Beat is made with Brooks cherries (similar to dark bing pie cherries), while Shades features yellow Rainiers. You may hear some Mingus playing, but the bartenders/DJs are prone to spinning a range of jazz or blues vinyl that’s fittingly underground. 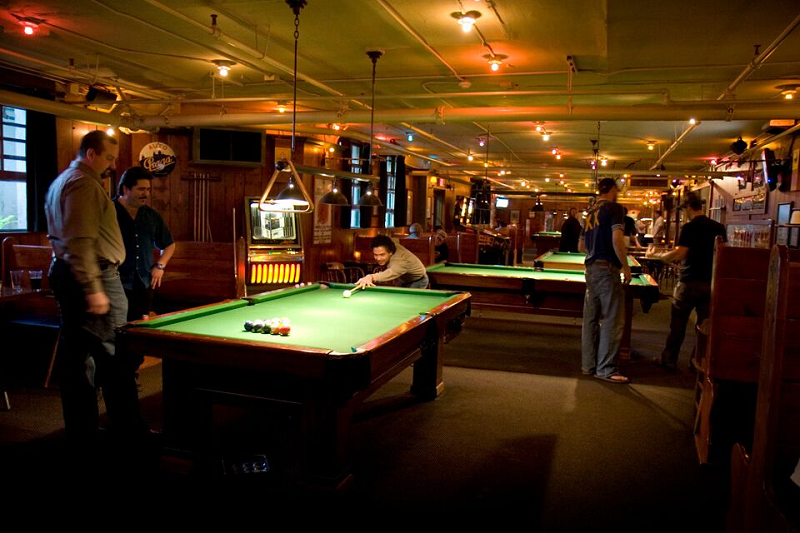 Twenty minutes east toward the Columbia River Gorge lies McMenamins Edgefield Brewery and, as part of its 74-acre grounds, Lucky Staehly’s Pool Hall (2126 S.W. Halsey St., Troutdale, Oregon). McMenamins’ flagship location, Edgefield was the Multnomah County Poor Farm that in 1991 turned into a 25-barrel brewhouse, distillery, winery, hotel, vaunted concert venue, herb garden, golf course and home to a whopping 10 different bars. During the 1970s, when Edgefield functioned as an old folks’ home, one wheelchair-bound resident named Lucky Staehly won at the 1977 Oregon Wheel Chair Games. He also hustled the other seniors in the home’s rec room. Today, the basement bar named in his honor includes five pool tables, a snooker table, darts, and a working juke box. There’s also a pair of pinball machines (including an X-Men one, because a pool hall and bar named for a heroic senior in a wheelchair should feature Professor X). This being the McMenamins with all the spirit and wine barrels, visitors can always find something rich and oaky, like a whiskey-aged porter or spiced rum-aged barleywine, to sink into.

While Asheville, North Carolina, certainly has come up in the beer world, one brewery has gone down. Enter One World Brewing (10 Patton Ave. #002) through what looks like a storm drain (or perhaps a Lewis Carroll-inspired rabbit hole). A ceiling of wooden slats almost makes it feel like the floor is upside down. Tucked below Farm Burger since 2014—in the old newspaper Leader Building that dates back to 1880—One World is a windowless wonder (TV-less, too). Crowds descend to enjoy all manner of IPAs—even some old school bright ones—with the most popular being Citra Bomb coming off of the one-and-a-half-barrel system. To brew down there, the staff forms a “grain train” to bring in the heavy malt bags and afterward does the same in reverse to bring barrels full of spent grain out into the light for a local farmer. 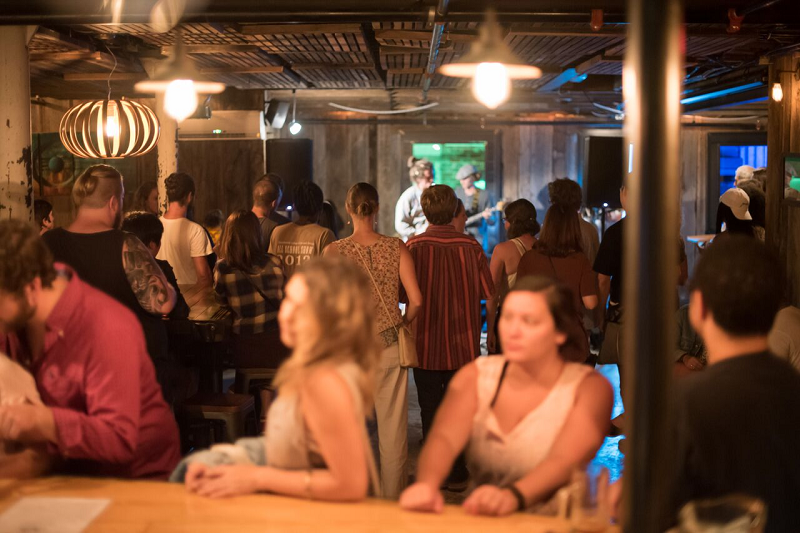 Farther south in Spring Hill, Florida, in 2015 owners Maurice and Tina Ryman dropped their baby Marker 48 Brewing (12147 Cortez Blvd.) into an old auto repair shop’s oil pit (where the mechanic catwalks have morphed into barrel racks). While the seven-barrel brewery is not fully underground, the stairs behind the bar lead down to the cellar with its own stately tasting room. In fact, they claim it’s Florida’s only underground barrel-aging cellar, which stands to reason since in most spots, digging a basement equals digging a swimming pool given the terrain’s water table. The room, visible through the windows in the floor, is available for rentals for you and about a dozen of your best buddies or coworkers.

This being Florida, sweet stouts are all the rage and the Mermaid’s Milk Stout is a top vote-getter (along with its whiskey-aged sibling, Kissed By A Mermaid). Meanwhile, Pine Island IPA, which leans more Northwest than Northeast in appearance, flavor, and temperament, is a tasting room mainstay.

One new sweet spot for subterranean sipping is in Prescott, Arizona, where even beer lovers flock to the speakeasy vibe of Superstition Meadery (120 W. Gurley St.). Mead being mead, Superstition naturally caters to many uninitiated in the ways of honey wine, which is for the best since many of its meads are far from traditional. Sample meads made with coffee and dates (Date Night), dry-hopped offerings (War Honey) or a PB&J in a glass (Peanut Butter Jelly Crime).

And finally, this list wouldn’t be complete without Underground Brewing in San Luis Obispo (1040 Broad St.) on California’s Central Coast. Although there’s a nice balcony overlooking a creek, this brewery—originally known as Creekside Brewing under different ownership—has its 13-barrel system in the basement. It feels like a grotto and area artists are invited to contribute to the mural and hold exhibits. Current manager Rai Reynolds says it’s for “local artists who […] were not part of the art scene here in SLO.” So underground. The brewhouse is downstairs, where there’s also a bar.

As a parting thought, looking at the relative newness of such breweries and tasting rooms in the United States, it’s important to put America’s oldest breweries in perspective. German immigrants used lagering caves at Yuengling, Wisconsin’s Leinenkugel, and Minnesota’s August Schell back to the 19th century. That tradition still lives across Germany. 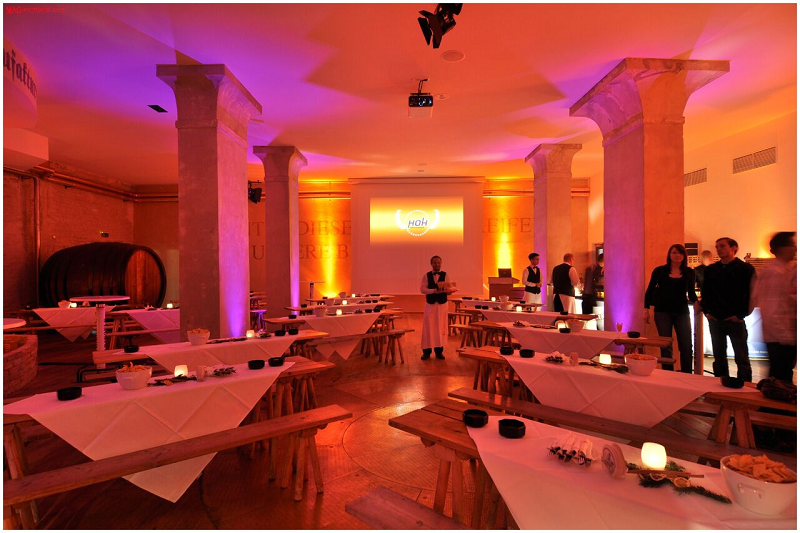 In the Bavarian city of Augsburg, the Riegele Brewery (Fröhlichtstrasse 26), founded in 1386, brews one of the single best pilsners—detectably hoppier and spicier that most German brewed pilsners—I’ve had the pleasure to enjoy: Augsburger Herren Pils. It’s brewed and lagered below ground in horizontal tanks (where braumeister Frank Muller promotes happy fermentation by playing Beethoven’s Symphony No. 9, Ode to Joy, to facilitate their own symphonic and harmonic flavors) down in the keller (cellar). While anyone can walk in and sample through Riegele’s divine lagers (ask for a “bierprobe,” or tasting flight), the tour includes visiting the keller. Riegele also produces the fine German IPA Simco 3. The ultimate treat, however, is getting to sip Magnus 15, the phenomenal, affogato-laden, bourbon-aged stout via their new barrel aging program, down in the dungeonesque tasting room.

Some 160 miles (or 260 kilometers) to the west, in the Black Forest city of Freiburg, steps from the Gothic cathedral, directly adjacent to Martin’s Gate, and below a food hall, you’ll find a brewpub that greets you with a whopping visual and aromatic wall of classic German fare. Martinsbraü (Kaiser-Joseph-Strasse 237) is perceived of mainly as a brewpub where families queue up for the food, but the copper kettles in the back are not merely decorative. The house pils is lemon peel in color with a grainy pilsner malt base, dry yet honeyed flavor, and wait for that kick of lemon-pepper in the finish. It’s OK to have that extra glass without fear of falling down the stairs afterward (because they lead up).

Finally, up in Kölsch’s birthplace of Cologne, the progenitor of the style, Sünner (Kalker Hauptstrasse 260-262), is a beer lover’s paradise with a welcoming biergarten for endless rounds of stange-fuls of kölsch. But descend into the Sünner Keller and not only can you enjoy the crystal-clear and tad-sweet refresher but, from the land that was doing hazy long before New England, you can enjoy their unfiltered Kellerbier (all kellerbiers are unfiltered) with ample bread and honey notes directly from the aging tanks.

Brian Yaeger is the author of Red, White and Brew: An American Beer Odyssey and Oregon Breweries.