Pull Up A Stool with Shane C. Welch of Sixpoint Brewery 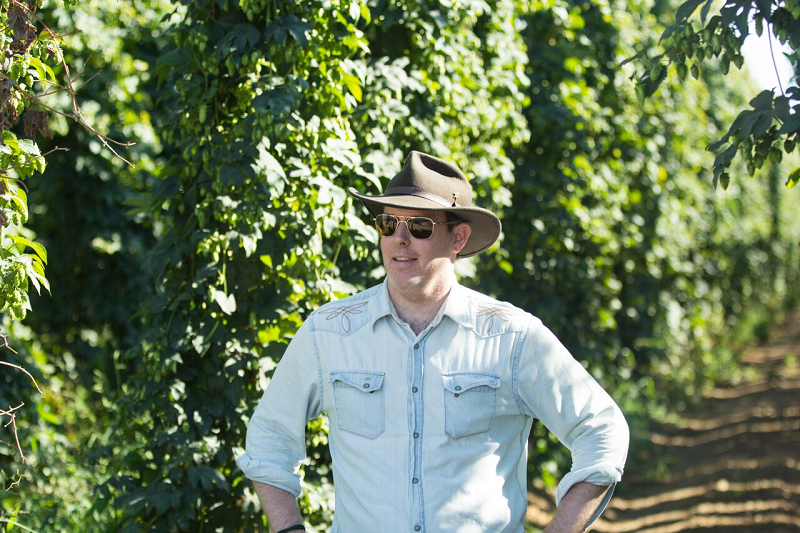 In 2017, Sixpoint Brewery overhauled several core brands, unveiled an app for a new series of small-batch beers and brought in Eric Bachli, previously a head brewer at Trillium Brewing Co. in Boston. Yet all of this is just the beginning of a new plan to change the industry over the next 10 years, according to founder Shane C. Welch.

Earlier this year you reformulated Sweet Action, Bengali, The Crisp and Resin. How big of a shift were you making with those brands?

It wasn’t a seismic shift; it was a more incremental thing. I think what we have done over the past three years or so is we started working a lot more closely and a lot more meticulously with our sourcing of raw materials. What we were doing as we became more acquainted with some of these farms we were working with—what hops they were growing and when they were harvesting them, how they were processing them—we started to learn what we think is a better way to use them and make them more relevant. It’s a better way to extract the real esters and juice out of these hops.

And you guys have reformulated many of your brands over the years, right?

I’d say almost continuously since 2004. It isn’t a recent endeavor for us. A beer formulation is very much like a model of a car or a software update. It’s a moving target. It’s the best you can do at that point in time, but as time moves forward, you have to hopefully evolve or at least stay one step ahead of the curve so you’re constantly relevant. If you just leave things be, everything becomes stagnant at that point.

It’s really interesting to see the way people’s tastes evolve, too. The human palate as a whole and as a society, we use to be very averse to bitter as a flavor. You didn’t see many IPAs people didn’t want to eat kale or anything that had any type of bitterness in it. And in 20 years time, bitterness has become a preferred flavor. It’s died down a little bit, but there was this period for a while where people were looking for the most aggressively bitter things. It’s just kind of interesting to see how the palate is constantly shifting.

And IPAs used to be all about the bitterness. Now, so many aim for that juicy profile that in some ways appeals to novices as well as beer geeks.

And also it’s really interesting to see what’s really driving this. These aren’t the people who built the craft beer industry who are driving this. It’s the kids who are in their 20s and they’re now dictating the future of this industry. And that’s another thing you have to reconcile with beer. The beer industry is not driven by guys in their 50s. If you look at it statistically, people generally stop drinking the same quantity of beer, and many stop altogether or migrate into drinking wine or spirits. The kids who are in their 20s, they’re going the extra mile to trade or wait in line, or participate in something that’s a little more scarce or hard to get. The whole approach, the whole business model, the whole paradigm is totally different.

You just launched your first small-batch beers through a new beta app. How does that app help you reach that new demographic?

It’s something I think a lot of people don’t understand. There’s been some conversation about it where people are like, “Why are they doing this app? It seems like this is a solution in search of a problem.” The app is not designed for 100 percent of our customers to buy all the beer we make through the app. The point is that it’s small-batch stuff that accounts for less than 1 percent of our production. The ability for us to have direct dial-up to those people is vital to us. We had the beta run on it last Saturday. The feedback is that it went exceedingly well. There’s room for improvement and a few things we need to dial in and get right.

You guys hired Eric Bachli earlier this summer. Many were excited to hear he was the head brewer at Trillium Brewing Co., but he also has an extensive background as a research scientist. What does he bring to the table not only in terms of those New England-style IPAs everybody loves, but also your entire portfolio?

This is the question, right? I think what happened was when the news of that broke, people grabbed the name and started to put two and two together. Sixpoint, Trillium, is this going to be a big shift for them? That was never the intent. I got together with our leadership team, and I talked about a 10-year plan for the company that I devised. I did one of these for the company before back in 2006, and it ended in 2016, so I did another.

People were connecting the dots. “They hire this guy who’s a research scientist, and he’s leading a new product development team. Then they launch this app.” And we have another big announcement coming soon as well. Individually they might be like, “Wait a minute, what’s going on here?” But in one or two years, you’re going to see how all these dots are connected, and it’s going to be awesome. It all has a longer-term plan. The easy way out in beer is to make the flavor of the week, build up the hype machine, pump the shit through Instagram or whatever you’ve got to do. Pump and dump; move onto the next one in hype.

We don’t need to do that. If you have a 10-year plan and it involves changing the industry or changing the paradigm of the beer industry, you’ve got to be committed. That often means not getting distracted by the latest greatest trend. So the New England-style IPA? Yeah, we make them; we like the style; they are certainly the flavor du jour. But I want to make sure that we don’t get distracted. It’s fun to be contemporary, but at some point the market’s going to pivot again, and if you’re all in on that, you’ll become a caricature of yourself.

Can you talk at all about that 10-year plan?

It’s close to the vest right now, but I think once we have everything in motion, it’ll be public knowledge.

How about that first 10-year plan?

I think in my original business plan, our goal was to eventually run a sustainable brewery and sell 5,000 barrels of beer a year. I think the first 10 years for me was more about survival. How can you build something that can survive and you can keep the lights on and prove you’re running a business that works? Now that we have a brand, we have some customers and some equity we’ve built over the past 13 years. Instead of just doing what others are doing or just riding the gravy train, it’s really time to change the industry. We have a really inspired, intelligent team with some great people in brewing, marketing, operations, finance—all these little components of the company. I’m just really lucky to be surrounded by these people. They want to take risks, and they want to be bold. The next 10 years are going to be a little more driven toward innovation and making a dent in the beer universe.

What is it about the industry you want to change?

Without getting too specific, I can leave you with this. The industry as we know it right now is still largely the same and almost identical to what it was in 1933, when they repealed Prohibition. You have a factory, you make beer, you sell to a wholesaler, they sell to retailers, and people buy it from bars, restaurants and grocery stores. We’re at a pivot point in the industry where that entire model, in my opinion, is going to get completely torn apart. It’s driven by major changes in technology, some of which have already happened—like social media—and then some that are coming, are happening right now or they’re imminent. I truly believe that 10 or 20 years from now, this industry is going to look nothing like it does today. It’s going to be totally disrupted. I’ve been trying to build a team around that principle.

–This interview was conducted and edited by Daniel Hartis, editor of All About Beer Magazine.

Shane C. Welch At A Glance

Beer that inspired him early in life: Alaskan Smoked Porter

Couldn’t live without: My wife and family

Favorite place to have a beer: The Horse Brass Pub in Portland, Oregon

Wishes he could buy a round for: Barack Obama

Keeping him up at night: Coffee stouts