Pittsburgh has come far since James Parton described it in 1868 as “hell with the lid taken off.”

Gone is the industrial valley choked by its own smoke. In its place is an emerging tech hub. Beautiful parks from the Point to Mount Washington. Two major research universities and an eminent medical center. Downtown neighborhoods re-emerging from de-industrialized slumber. And, through it all, a constant brewing beneath the surface (literally, but we’ll get to that in a moment): beer. 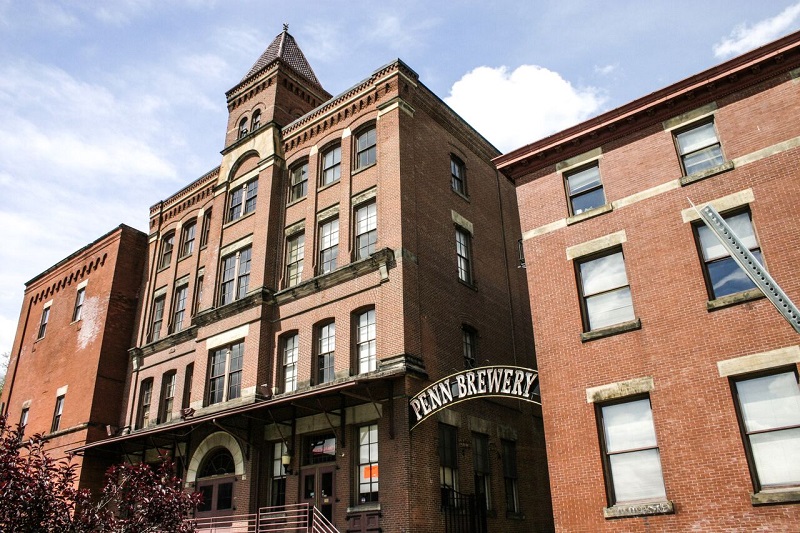 Penn Brewery (800 Vinial St.), situated in the Deutschtown section of Pittsburgh’s Troy Hill neighborhood, provides a prime example of Pittsburgh’s past bridging its future. Located on a complex that has hosted brewers since the mid-19th century, the brewery, which began production in 1986, initially hewed to producing the same German-style lagers that would have been the bread-and-butter of the site’s former occupants. However, following consumer trends toward smaller and more local producers over the last few decades, and the taste shifts that has entailed, the brewery recently added a small-batch system and introduced more vogue styles. These include an IPA with tangerine and vanilla and a hopped Flemish-style sour, not to mention a series of barrel-aged beers aged in local Wigle whiskey barrels.

For those who are from the Pittsburgh area but moved away, like myself, a visit to Penn mirrors the nostalgic comfort of a return to this idiosyncratic home. The mud-red brick of the buildings seeps with the history of Pittsburgh’s century-plus-old industrial age, but without any sense of decay, and inside, the basement and first-floor taprooms are simple, tavernlike affairs with a fussless arrangement. Outside, in a courtyard floored by cobblestone, a biergarten provides a welcome spot to drink in warm weather. There’s a cool breeze even when the wind isn’t blowing—but that, too, we’ll get to later. 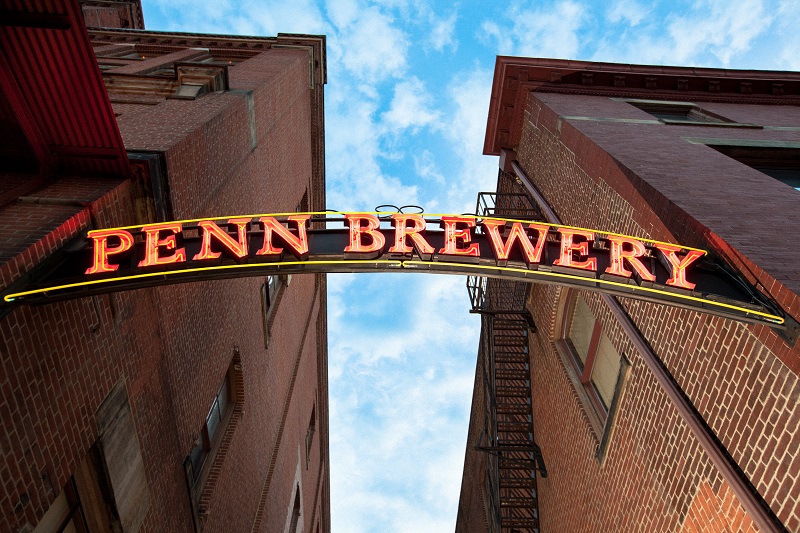 The fare could have been read from a caricature, but I say this with a smile. I personally didn’t opt for the Buffalo chicken pierogies, but I did do my best on a delicious, heaping plate of Pennsylvania-made sausages (kielbasa, bratwurst, Italian, wild boar), as well as a beer flight and cheese plate combo. My grandmother, who accompanied, ordered the Yinzer’s Salad (“yinz” being Pittsburghese for “you all,” a derivative of the area’s Scottish ancestry). And, this being the Steel City “n’at,” it was indeed topped with french fries … as well as eggs and grilled chicken.

If it’s your first visit to Penn Brewery, the cheese plate/beer flight combo is a fantastic introduction: five generous pours of Penn’s classic beers—Penn Gold, Penn Dark, Penn Weizen, Kaiser Pils and Penn IPA—and five cheese pairings for $18. (Note: I subbed out the third selection for a small-batch passionfruit Berliner weisse out of preference for the tropical and lightly lactic kick.) Though I’d recommend following Penn’s suggested pairings, I also advocate for trying your own combinations, including mixing the smoked cheddar with Penn Dark (the sweetness of the dunkel gels well with the cheese’s smoky salinity). In all cases, the beers are easy-drinking but flavorful, and would please both advanced and atavistic palates alike. This is a place for both the old and new Pittsburgh.

Lastly, a visit summary of Penn Brewery wouldn’t be complete without unpacking those mentions of mysterious breezes and brewing underground: From the courtyard, and from within the brewery, Penn has uncovered arched access points into lagering tunnels that likely date back to the complex’s origins in the mid-19th century.
Though not fully accessible to the public yet, a viewing station and select shallow entries give patrons windows into brewing history. Through them, you can see lagering barrels so old and waterlogged that they’d take on a handprint. You can feel and smell cool cave air, which brewers employed for bottom-fermenting beers before the invention of refrigeration.

Currently, Penn Brewery is working with University of Pittsburgh students to preserve, study, utilize and better understand the tunnels.