While I’ll travel something fierce to experience the best or most beautiful, most remote or most weird breweries, it’s less reported that I’m also a sucker for doughnuts. I profiled a veteran doughnut baker before I ever interviewed a brewer. I just produced the fourth Baker’s Dozen Festival in Portland, Oregon, which juxtaposed coffee-infused beers from 13 breweries with gluttonous bites from 13 of the area’s best doughnut shops.

So when I found out that Ohio is home to a bona fide Donut Trail (I only use that truncated spelling when it’s in a proper name)—and not in one its metropolises like Cleveland, Columbus, or Toledo, but sandwiched in Butler County between Cincinnati and Dayton—I had to tackle it.

Conceived of by the Butler County Visitors Bureau as a tourism draw to an area road-trippers might otherwise circumvent via I-75, said bureau sponsored my conquering of the 11-shop Donut Trail from my nightly pillows to pillowy balls of dough.

I allotted two mornings to inhale all those frosted, filled and fried morsels, then two afternoons all aglazed visiting Butler County breweries.

The symbiotic relationship between beer and doughnuts is found throughout Ohio. At Municipal Brew Works (20 High St.) in Hamilton—conveniently located across the street from my accommodations at the Courtyard Hamilton Hotel—The Dapper Doughnut is just one of many food trucks often parked outside. Because the brewery’s home is a 1935 municipal building that previously housed the fire and police stations (replete with a county jail that’d make for a unique tasting bar), vending fresh, hot mini doughnuts is a natural. While True West Coffee Porter is the natural complementary beer, I found that mixing it with the Orange Agave Blonde Ale nicely mimics the flavors of a café Borgia (think mocha with orange zest). 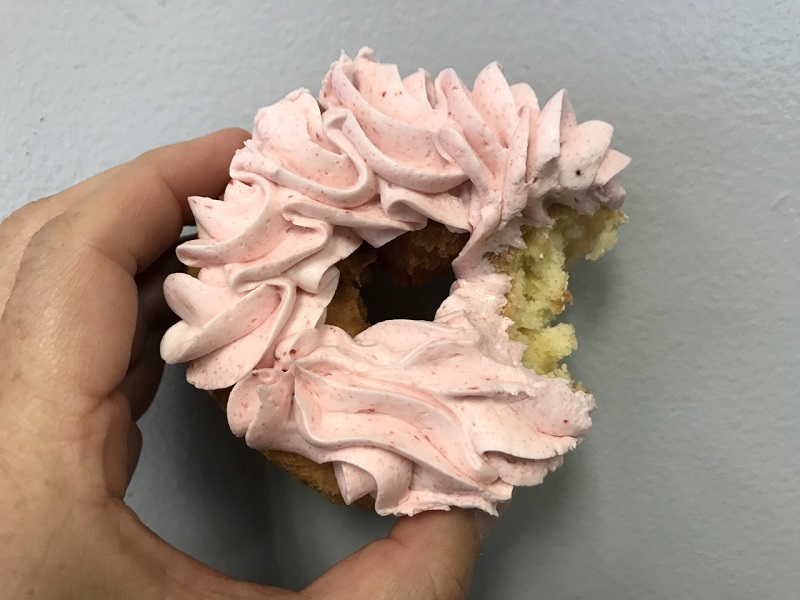 Not all of the breweries correlate to doughnuts. At FigLeaf Brewing Co. (3387 Cincinnati Dayton Road) in Middletown, the four-vessel brewery with a taproom off the interstate between Dayton and Cincy offers light-bodied quaffables such as Basmati Cream Ale with a pleasant floral aroma and dual 7.2% IPAs (ISO-Trope and ISO-Hazy) for those who prefer their IPAs new-school cloudy or old-school clear.

Four miles away, Rivertown Brewery and Barrel House (6550 Hamilton Lebanon Road) is a larger production brewery distributing to seven states—but the on-premise brewpub is a destination for serious drinkers and fun-loving families with arcade games strewn about. The food menu is heavy on smoked meats (even the deviled eggs are brilliantly topped with Russian imperial stout-infused burnt ends) while the beer list ranges from plenty of lighter options (3984 Lager and Divergent Berliner Weisse) to West Coast and New England IPAs to some culinary experiments like a black gose brewed with black sea salt, black malts, and blackberries. Meanwhile, a 15-minute drive south into West Chester, DogBerry Brewing (9964 Crescent Park Drive) brews on a one-barrel system to keep the tap list long and diverse. The English-inspired Hook’ed Leg ESB is not cask conditioned but is served on nitro for a tasty and smooth pint, the Czech Pilsner is exceptionally clean, and there’s a place for smoked malts, hibiscus flowers and more among the 19 taps.

Meanwhile, last year in Cleveland a spot called Brewnuts (6501 Detroit Ave.) opened up. The whole concept here is chowing down on doughnuts—all made in house using local craft beer—and sipping locavore beers. The maple bacon doughnut with North High Brewing’s Tree Tapper maple brown ale from Columbus is a natural. Incidentally, Cleveland’s also home to one of three markets to host a new annual event called DonutFest (and I love that one of the participating Ohio bakeries is called Holey Toledough).

Inevitably, once you’ve successfully had your Donut Trail passport completely stamped, someone asks, “What’s your favorite?” Forced to pick, it’s Holtman’s Donuts (9558 Civic Centre Blvd., West Chester). The shop is now run by founder Charles Holtman’s grandson Dan, and has three other locations in Southwest Ohio. I didn’t get to try the “beer doughnut” they collaborated on with Cincy’s Fifty West Brewing Co. but among their 30 daily varieties (sometimes twice as many on weekends), the maple bacon rounds are better than your prior favorite of this sort. Yet the Buckeye, three inches tall and chocolate glazed with a decadent peanut butter mousse center, is the way to go. 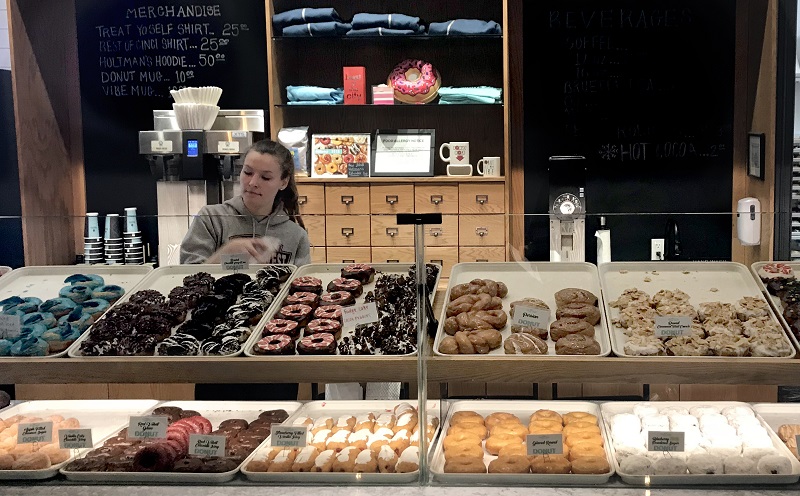 Stan the Donut Man (7967 Cincinnati Dayton Road) is the West Chester strip-mall based bakery offering a long display case of glazed treats. Some are colorful, some are chocolaty—but all are priced around a buck each. I opted for the cinnamon bowtie with a thin ribbon of sugary spice inside the fluffy yeast doughnut. At The Donut House (8268 Princeton Glendale Road), a new shop tauntingly located across the road from a Dunkin Donuts, the stars here are the ones you “fill” yourself: choose classic glazed or chocolate- or maple-glazed long johns and select from several fruit or cream fillings. I went crazy and got blueberry and vanilla cream for the win. At the 40-year-old Donut Spot (5148 Pleasant Ave. in Fairfield), where doughnut-themed art hangs on the walls, the Homer Simpson-style pink, sprinkled doughnuts are a customer fave. My final stop on the first day was Jupiter Coffee & Donuts (5353 Dixie Hwy # 5, Fairfield) which nails the arty coffee house vibe. The “Red Storm” is a strawberry glaze swirled cinnamon roll, itself a big leap from the strawberry shortcake doughnut with a pompadour of strawberry fluff. 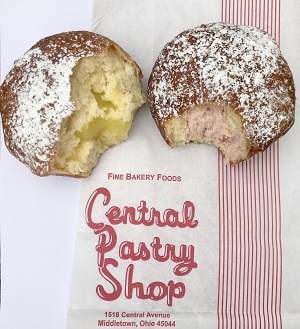 Early the next morning, I walked into Mimi’s Donuts & Bakery (2267 Millville Ave., Hamilton) and sunk my teeth into the Reese’s, which, mercifully, is available as a mini since the peanut butter custard filling goes a long way. At Kelly’s Bakery (1335 Main St., Hamilton), the Kellybread—it and the bakery named after the founder’s daughter—is designed like a pull-apart in bar form. The cinnamon drizzle seals the deal. There’s no Ross at Ross Bakery (4421 Hamilton Cleves Road, Hamilton), so named because it was originally located in the town of Ross 10 miles south as the cronut flies. The old world klunker could be an antecedent to a buttermilk bar in its more amorphous embodiment. Nor is there a Martin at Martin’s Donuts (4 W. State St.), but the new owner kept the name and most of the offerings. There’s a banana-cream-filled doughnut with crushed vanilla wafers, but you have to get there earlier than I did because it was sold out. The cream-filled and crushed-Oreo-topped one floated my boat, er, sprinkled my doughnut. Central Pastry (1518 Central Ave., Middletown) is a full-service bakery. I fortuitously arrived at the end of pączki season (which is to say Lent). These Polish pockets (pronounced like poonch-key) are more or less jelly doughnuts. Before leaving Middletown, I closed out the trail at Milton’s Donuts, an institution that has used the same recipe and equipment since opening in 1960.

With my final passport punch, I felt a joyous sense of completion and camaraderie with my fellow doughnut travelers. I did not do this for the T-shirt that finishers can collect with a fully-stamped passport. I did it for the glory.

Chicago
The Second City is also the second market to host DonutFest, proving it’s serious about doughnuts. With more than 70 breweries in city limits, it’s also a serious beer town. Thanks to its Polish heritage, when Timeout Chicago listed hot spots to find the best pączki (basically Polish jelly doughnuts) on Fat Tuesday, they came up with a full baker’s dozen. Among them is the South Side institution Bridgeport Bakery (2907 S. Archer Ave.) whose stuffed delicacies total 19 flavors. But it’s the chocolate pudding one that inspired the Pączki Stout from Marz Community Brewing Co. (3630 S. Iron St.), thereby one-upping quotidian pastry stouts. The double milk stout is brewed with Peruvian cocoa nibs, and at 7% a pint and a pączki is probably enough to get anyone through Lent.

San Diego
This SoCal bastion of beer culture supports 70 breweries (the 150-plus count that gets used is for the entire county). Nomad Donuts (3102 University Ave.) has collaborated with about 25 of those breweries, including several in its North Park neighborhood such as Fall Brewing Co. (4542 30th St.), Eppig Brewing (3052 El Cajon Blvd Suite C), and North Park Beer Co. (3038 University Ave.). So popular are these Nomad collabs that Kristianna Zabala, the shop’s executive pastry chef, undertakes at least one monthly (and daily during San Diego Beer Week). One brewery that partners with Zabala beyond sugary doughnuts is Council Brewing (7705 Convoy Ct.), with its Magic Factory sour sideshow. One dinner course featured a Scotch quail egg savory doughnut glazed with chamomile and paired with Council’s Separate Haze IPA.

Denver
Do you sense a pattern emerging? Beer meccas are becoming doughnut paradises. Denver’s River North neighborhood supports a baker’s dozen breweries. One such brewer, Ratio Beerworks (2920 Larimer St.), organizes the Cool Beans event featuring its own beers infused with coffee, including Domestica blonde ale and an Irish-coffee-flavored version of Nobody’s Darlin’ strong ale. Logically, Denver doughnut legends Glazed and Confuzed (2501 Dallas St., Aurora) were on hand doling out doughnut holes. Over in the Highland neighborhood, Habit Doughnut Dispensary (1553 Platte St.) takes the Mile High’s affinity for hip doughnuteries and prescribes the cure—like the “Blazed” (brûléed) glazed. A block away at Denver Beer Co. (1695 Platte St.), you can enjoy Princess Yum Yum Raspberry Kolsch with the tart strawberry lemonade doughnut. Some of Habit’s creations are even served with a shot tucked inside, giving the boilermaker its much-needed 21st century makeover.

Brian Yaeger is the author of Red, White and Brew: An American Beer Odyssey and Oregon Breweries.