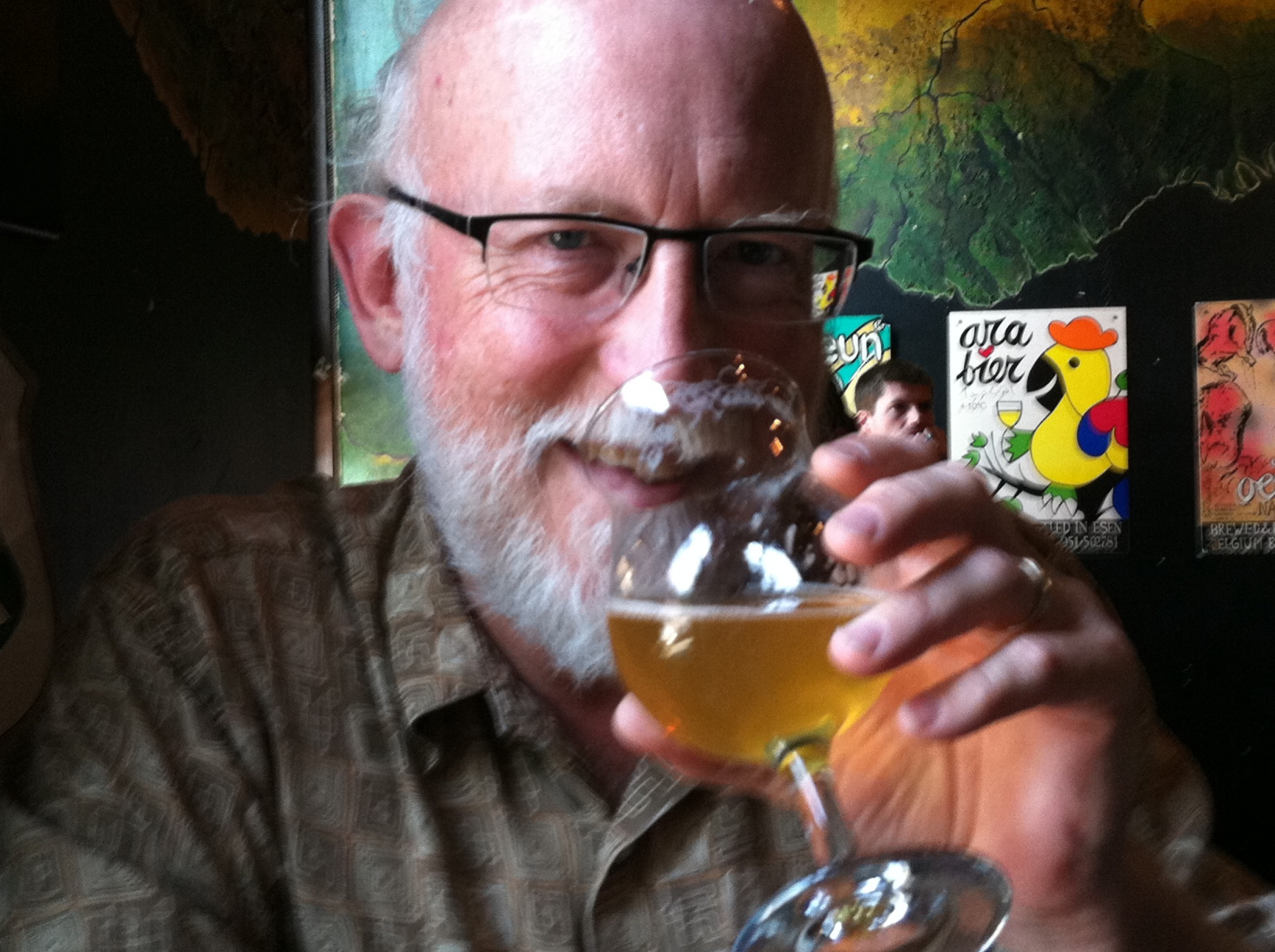 Every beer taster can recognize the bitter snap of hops on the palate, the caramel-to-roasty spectrum of malt aromas and occasionally the spicy, fruity signatures of certain yeast strains. We love beer’s boldness, and in recent years the volume has definitely been turned up. Amid all the hubbub it’s easy to overlook one of its unique charms: mouthfeel.

It’s a catchall term referring to sensations in our mouths that are not taste, aroma or that hybrid of the two we call flavor. Beer impacts the nerves in our mouth with a number of textures that add depth, please the palate and aid in its ability to harmonize with food. These sensations are sometimes called trigeminal sensations, after the nerve that sends signals about heat, cold, texture and certain chemical sensations like mint, chili and astringency in the mouth. It’s amazing evidence that our sensory systems use all kinds of tricks to squeeze out the most information possible from every little sip.

Beer presents a range of mouthfeel sensations found in no other single beverage. Many are quite pleasant—think about the tingle of carbonation or beer’s slightly weighty body. Others, like creaminess, may be appropriate or not depending on the beer style. Some can be pretty negative. The dryness of astringency is rarely welcome except in very small doses, where it can crisp up the finish and add to beer’s refreshing quality. While mouthfeel sensations abound in beer, one must search them out to experience beer in every glorious dimension.

Let’s start with body, that sense of weight on the tongue or sense of density that every beer has in one degree or another. Many people assume that beer’s body comes from unfermented sugars or starches, and these do contribute a sense of richness in styles such as doppelbocks or Scotch ales that contain a lot of unfermented carbohydrates. However, beer’s body-building muscle comes from a network of proteins contributed by its main ingredient, malt. Dispersed in liquids under the right conditions, proteins intertwine to create a state of matter known as a colloid. By forming a sort of 3-D fishnet, these proteins entrap water and increase viscosity. Every schoolkid is intimately familiar with colloids in the form of gelatin dessert, its wiggly, wobbly blobs of sweetly colorful water miraculously held together by a pinch of protein. Beer is the exact same type of colloid, albeit much less dense.

The colloidial structure turns out to be responsible for the persistence of beer foam, lingering cloudlike atop our pints. The same web of proteins stretches out to form the skins of the bubbles, trapping CO2 gas. It turns out that the proper proteins for best body and foam retention is a bit of a Goldilocks problem. Proteins are a broad class of molecules with many differing properties and sizes, and they can be cut into smaller pieces during malting and brewing. The largest proteins are too big to form colloids and if left in the beer will precipitate into haze. The smallest pieces of proteins are helpful for yeast nutrition, but are too small to build colloidal networks. Mid-length proteins are just the ticket, but it takes great understanding of malt and the mashing process to manage their presence to end up with a beautifully dense and long-lasting head, manifested by “Brussels lace” tracing every sip on the side of the glass as it is emptied. Like so many aspects of beer, there are many ways to screw it up.

Closely related in feeling to beer’s body is creaminess, a quality also known as “oily.” This common and important character of wheat beers and those using oats or rye is the familiar slippery texture of oatmeal. It comes from complex, gummy carbohydrates like glucans or pentosans that are present in grain. As they are unwanted in most beers, maltsters take care to reduce them to low levels, but they can be plentiful in unmalted grains. The next time you enjoy an oatmeal stout, rye IPA or Belgian-style witbier, look for this creamy quality. If it’s not there, something’s wrong.

On the opposite side of the spectrum you’ll find the sharpness of tannins or the bite of astringency. In most beers, they are minimal, but can become obtrusive. The sources and causes vary. Most plant material, whether barley husks, hop cones, grapes or wood, contain material called polyphenols, which act in various ways in plant cells, one of which is to taste nasty, which makes the plant unappetizing to herbivorous animals. Depending on the specific varieties and brewing conditions, some of these can find their way into the finished beer.

In large doses, polyphenols become a negative. Astringency comes to head late in the taste of a beer, after the sweetness of the malt has diminished, changing from a clean bitterness to a lingering raspy sensation. Particularly afflicted specimens may become mouth-puckeringly dry, leaving you with a desire to scrape the offending tannin off your tongue with the nearest available sharp object.

In beers without fruits, wood aging or other special effects, most tannins come from grains. They are concentrated in the husks and outer layers of the malt kernels, and the levels vary by variety and growing conditions. Moderate climates seem to produce the least; much more is present in either hot- or cold-climate barley. Extreme-weather barleys are frequently six-row varieties, which, because of their slimmer kernels, have more husk relative to the weight of the whole grain, magnifying the problem. Brewers know to choose their malt carefully.

Polyphenol extraction in brewing is very sensitive to pH, increasing dramatically as the water becomes more alkaline, so controlling water chemistry is crucial for making smooth beers without harsh aftertastes. Hops also contain tannic material in their leafy bits. Hoppy beers can be harsh and unpleasant if brewed with water containing too much alkaline mineral, typically the calcium carbonate that is the main ingredient in limestone geology.

Adjuncts are a mixed bag. Corn contains very little tannin, but rice contains a noticeable amount. Beers such as Budweiser that use rice as an adjunct are often thought of as having an especially crisp bite—one of the defining characteristics of that brand. Sake brewers are very sensitive to the smack of tannic astringency, since they make their products entirely from rice. The most important measure of sake quality is how much of the outer part of the rice kernel has been milled away. The most expensive sakes use pinhead-sized pieces from the very center of the rice grain, as it has the least amount of tannin, making these luxurious drinks exceptionally smooth.

Fruits, herbs and spices also contain some tannin, but more often than not its effect is overshadowed by the more intense qualities of those ingredients such as acidity or spicy aromas. Wood, especially the oak most commonly used for barrels, contains plentiful tannic material, which is used in wine-making to add weight to red wine, creating an important element of balance and helping it pair well with rich, meaty foods. Bourbon-barreled beers are often so strongly flavored that the tannic finish is obscured, but wild and sour beers such as lambics and Flanders red ales typically display a soft oaky-tannic finish.

We can’t leave a discussion of mouthfeel without talking about carbonation. Although simple in nature—just CO2 gas dissolved in liquid—it has a major effect on the character of beer. Its evolving bubbles tickle our palates, and there is some evidence that carbonation may be a tongue taste just like sweet or bitter. The physical motion of the bubbles brings turbulence into our mouths, scrubbing away fat and other rich tastes in food.

Carbonation is under the brewer’s control, ranging from quite low to very high. Traditional British cask ale tends to be pretty low, adding just a prickle of brightness and lifting malt and hop aromas out of the glass. Low carbonation allows the full flavors to show through and is a very important characteristic in this style. Conventional ale carbonation tends to be higher outside Britain. Because it is served cold, lager is a step higher yet. In general, the beers of Belgium, especially the abbey types, tend to be highly carbonated, boosting aroma and a sense of dry drinkability beloved by drinkers there. The gueuze form of lambic is champagne-fizzy, while traditional straight lambic may be just about dead flat. German-style wheat beers also get a heavy charge of carbonation, which seems to balance the milkshake creaminess that is their other essential mouthfeel quality.

With the richness of malt or the pungent blast of hops to be found in modern beers, mouthfeel may never be the first thing anybody thinks about when sipping their favorite brews. However, it pays to watch for it when tasting critically or just for fun. Its subtle charms add a lot of depth to our favorite beverage, and without it we would be faced with something far simpler, less balanced and much less compelling. And how would your mouth feel about that?

aab
Randy Mosher is the author of Tasting Beer and is a senior instructor at the Siebel Institute.