An Inside Look at the Pioneering Days of American Craft Beer 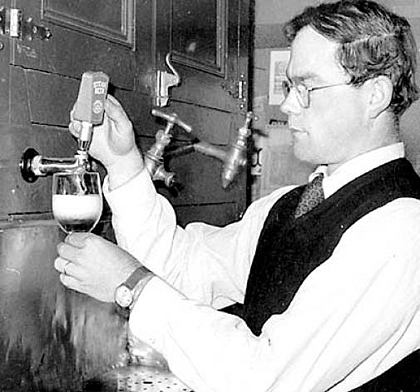 Fritz Maytag bought a controlling share in Anchor Brewing in 1965, around the time when more than 80 percent of the beer sold in the United States was made by just six breweries. Photo courtesy of Anchor Brewing.

One day in August, 1965, a 27-year-old former graduate student in Japanese studies at Stanford walked into his favorite bar, the Old Spaghetti Factory in San Francisco’s trendy North Beach neighborhood. He ordered his usual: an Anchor Steam. The bar’s owner, a World War II veteran and local eccentric named Fred Kuh, ambled over. “You ever been to the brewery?” Kuh asked the young man (they knew each other).

The next day, the young man walked the mile and a half from his apartment to the Anchor Brewery at Eighth and Brannan streets, and bought a 51 percent stake for what he would later describe as “less than the price of a used car.”

The purchase came at a restless time for Maytag, who already looked every inch the Midwestern patriarch he would come to resemble in later years: trim, compact, with large-frame glasses and close-cropped hair, a tie knotted snugly during the working day. The Kennedy assassination less than two years earlier had jarred him, and made him reconsider his Stanford studies, which he came to regard as “very minor.” He dropped out in the midst of what we would come to call a quarter-life crisis.

What was he going to do with his life? He had grown up on the family farm in Iowa, about 35 miles east of Des Moines. There, he was aware not only of the appliance empire started by his great-grandfather, a German immigrant, but of his father’s blue-cheese concern. Frederick Louis Maytag II, using a herd of Holsteins and the expertise of Iowa State’s dairy department, made blue cheese modeled after the Roquefort style in France. Like the French, he aged the cheese in caves: two 110-foot-deep ones dug into the family farm in 1941.

“I saw the pride with which my father reacted when people would ask him, ‘Have you anything to do with that blue cheese?’” Maytag recalled decades later.

Perhaps that’s why Maytag bought Anchor after barely an hour of checking it out (he would buy full control in 1969). The brewery was the last of its kind in America: one that made small batches of beer from traditional ingredients and distributed locally.

Tom Acitelli
This story was adapted from the new book, The Audacity of Hops: The History of America’s Craft Beer Revolution by Tom Acitelli. He can be reached via email and on Twitter.