The Craft Brewers’ Compendium: An Omnibus of Brewing Materials 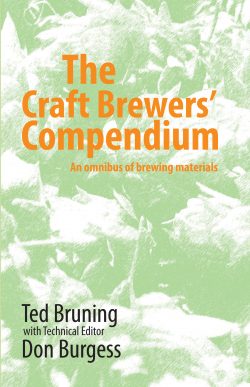 The Craft Brewers’ Compendium: An Omnibus of Brewing Materials

Does the world need another encyclopedic approach to beer? Ted Bruning and Don Burgess thought so. The two have undertaken the Herculean task of cataloging as many varieties of malt, hops and yeast as they could find. Not only that, but they also include entries for obscure brewing sugars (rice syrup, jaggery, muscovado), fruits, vegetables, herbs and spices, listing not only how a brewer might incorporate these ingredients, but what they might bring to the final beer. You might expect a dry read, but there’s humor sprinkled out (as when they clarify that the Kracanup hop was “named after the farm on which it was bred and not, apparently, as an Ozzie joke.”). —Daniel Hartis