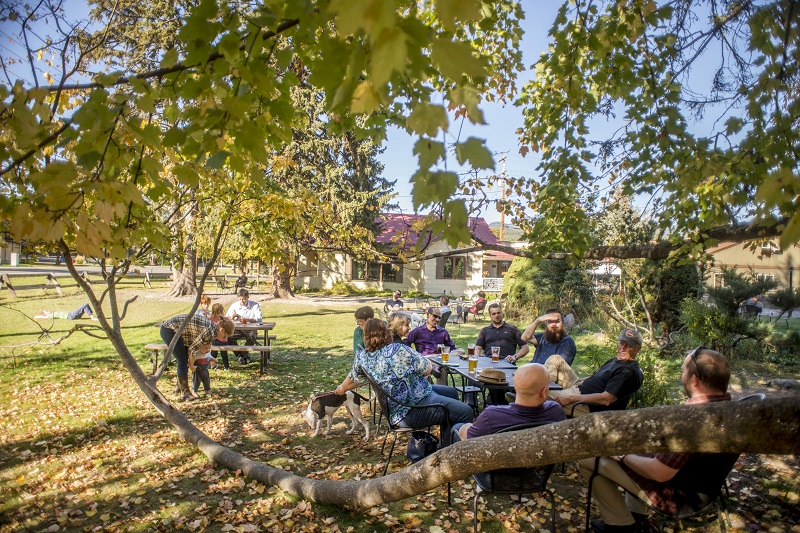 It’s the big juxtaposed with the small that makes Bonsai Brewing Project stand out.

“Bonsai is an art, and ‘Standing in the Shadow of Giants’ is our motto,” says owner and brewer Graham Hart, holding a fragrant pint in hand and resting an elbow on a pine-paneled bar with a black tile top.

The motto, explains Hart, 35, references not only the house’s relationship to the mountain, but also his aspiration to turn his not-yet 3-year-old business into “a miniature brewery that’s timeless.” 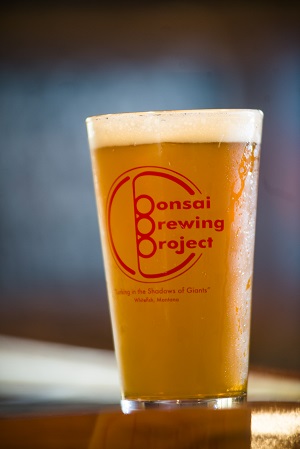 A pint of Ăday Āday is seen on the counter at Bonsai Brewing Project in Whitefish, Mont. (Photo by Lido Vizzutti)

Time certainly loses urgency at Bonsai. There is relaxed but colorful attention to detail here. Inside on a late Wednesday ($2 off growler fills) in September of 2016, it sounds of Marvin Gaye and smells of malts and smoked meat. A blackboard sketched in colorful chalk above square, wooden tap handles advertises the drafts. Perennials have names like Lil Blond Honey and The Unkindness Stout. One special batch goes by Big Poppa. Another, a plummy, chocolaty blend of three IPAs aged in bourbon barrels, is called Three Wise Men.

Outside, on a barbecue shaped like an oil drum, kebabs, sausages and the main ingredient in today’s special—pork verde—sizzle. The dish comes piping hot on coconut rice as a stew made of organic, local tomatillos and New Mexico chilies topped with sour cream and cilantro. The only cure for the fire it leaves in the mouth is a pint of the smoky Sheriff John Brown Ale.

On the large lawn, Moddey Dhoo romps with a golden retriever, a husky and a black lab. Then the pup gets no rise from a springer spaniel lying in a patch of golden light. Bonsai shows they’re welcome by selling dog collars. Right next to baby onesies. Atmosphere.

Like that lazy spaniel, we relax on sun-warmed lawn chairs underneath a pair of towering spruces. It’s a fine place to gaze at the larch trees sprinting up the mountain. And to tongue-tap a taste of Three Wise Men.

It’s a Zen reminder that sometimes the biggest pleasures in life are the little ones.